Stephen Hawking is an idiot.

From the Apr. 25 Sunday Times: 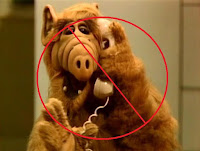 The aliens are out there and Earth had better watch out, at least according to Stephen Hawking. He has suggested that extraterrestrials are almost certain to exist — but that instead of seeking them out, humanity should be doing all it that can to avoid any contact...

...Such scenes are speculative, but Hawking uses them to lead on to a serious point: that a few life forms could be intelligent and pose a threat. Hawking believes that contact with such a species could be devastating for humanity.

He suggests that aliens might simply raid Earth for its resources and then move on: “We only have to look at ourselves to see how intelligent life might develop into something we wouldn’t want to meet. I imagine they might exist in massive ships, having used up all the resources from their home planet. Such advanced aliens would perhaps become nomads, looking to conquer and colonise whatever planets they can reach.”

Any race advanced enough to master intergalatic light speed travel or travel through wormholes, has the technology to create energy without consuming massive resources. Heck, even our comparatively primitive civilization will never completely consume all of Earth's resources.

An alien race roaming the unconceivably expansive universe finding planets to completely strip of all resources, when it would be technologically easier to find ways to create energy and needed resources out of common matter, or to simply reconstitute spent resources? That's just silly.

And any alien civilization advanced enough to master the technology necessary for intergalatic travel would easily be advanced far beyond using premptive violence. Again, even we are almost to that point.