More sickness. Democrats mock and heckle the Duggar family over news the mother has suffered a miscarriage.

Why? Democrats are accuse the family of "robbing" the government of revenue by having many children who can be declared dependents on tax forms.

Yes, Democrats are saying you are shirking your duty to provide for the government by having children. Sickos.
No comments: 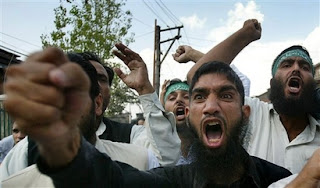 Read here as Democrats laugh, cheer and applaud as over 100 Occupy Wall Street animals "storm" the set of "Law & Order" and forcibly shut down filming after hearing it was for an episode about the movement.

Democrats say the set should have been forcibly stormed and filming stopped by force because the potential, unknown plot of the episode would probably have offended them.

They also say the actors and writers should be forcibly stripped of their First Amendment rights because their opinion is not "valid" and that for-profit TV shows are "exploitative."

Democracy? No. This is what totalitarianism looks like.
No comments: