Why are independent voters turning libertarian? 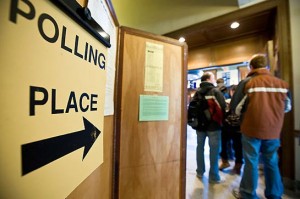 Aside from the fact we're right on everything 100% of the time.

Matt Welch looks at the growing phenomenon of independent voters backing libertarian candidates in this month's issue of Reason.

He writes, in part:


But even after the initial Iowa caucuses, exit polls showed something extraordinary: Independents are making up for the enthusiasm gap created by the declining rolls of Republicans, and they are breaking hard for the only libertarian in the race, Rep. Ron Paul (R-Texas).


The Iowa Republican caucuses had virtually the same voter turnout this year (122,000) as in 2008 (119,000), leading to many headlines like “Why the GOP Still Has an Enthusiasm Problem” (as Talking Points Memo put it). If anything, the problem for Republicans is worse than those numbers suggest.

In 2008 exit polls showed that 86 percent of Iowa caucusers self-identified as Republicans. In 2012 that share was down to 75 percent. The difference? Again, independents, whose ranks grew from 13 percent to 23 percent. And who did they favor? By more than 2 to 1, Ron Paul.


...The bad news for this legacy GOP is that voters have fresh memories of what big-government conservatism looks like, and they disdain it. The good news for those of us who share that disdain is that our numbers are growing.