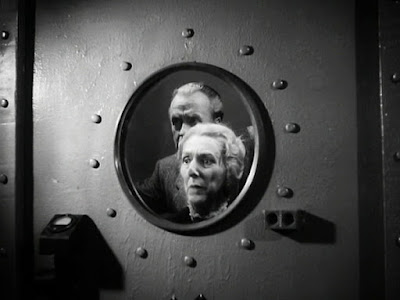 I had planned on watching "Teenagers From Outer Space," but LP Florida Director Karl Dickey reminded me there's another movie with an even more inane plot and wooden acting, 1964's "Monstrosity," best known for its use on "Mystery Science Theater 3000" under its alternate title "The Atomic Brain."

Long story short, it's another one of the thousands of movies in which pretty young women are threatened by an evil scientist and his subhuman assistant in a rural mansion that is eventually destroyed in a laboratory fire.

I'm not kidding. I've seen about six of them in just the last month (VooDoo Man, Frankenstein's Daughter, etc.) But this one has an entertainingly creepy old lady.

The creepy old lady places as ad looking for domestic help, strangely specific in her demand for young female applicants only. No, she's not played by Eleanor Roosevelt.

Creepy old lady's creepy gigolo picks up the trio of responders: a sweet Mexican girl, a voluptuous blonde with what is supposed to be an English accent but instead sounds like she's eating peanut butter and the smart, cute, good girl you know will be the last one alive. There they are inspected by the creepy couple's creepy doctor.

Creepy doctor decides to test his experiment by putting the brain of creepy old lady's cat into the cute Mexican girl's head. No explanation of how you keep the cat's brain from rolling around in there, or what they did with a perfectly good human brain.

The complications of putting a cat's brain into a human body come to light when Mexican girl/cat claws out the eye of horrible English accent girl, falls off the roof and doesn't land on her feet. They're going to need a bigger shoe box.

Oh, and there's a cute zombie girl who was another successful test run wanders around, and there's some kind of man-dog or werewolf from an unrelated and unexplained experiment. That doesn't go well either.

And I'm not sure what the deal is with movies about unethical scientists made between then 1940s and 1960s, but the movie ends with, yes, a laboratory fire.

But there's a twist. Instead of putting old lady's brain into the cute, good girl, the doctor put it into the cat, which survives the fire. No explanation of how you cram a human brain into a cat's skull without it looking like a broken tube of biscuits.

The movie makes it seem like the old lady will seek her revenge, but she's now a stray cat. I mean, she can't talk, she doesn't have thumbs and she'll be dead in ten years anyway.

So if you're scoring at home, that's one dead zombie girl, one dead man-dog, one dead Mexican cat-girl, a dead girl missing both an eye and a comprehensible English accent, a dead gigolo, a dead old lady with no brain and a Mexican girl's brain with no body. Sounds like inventory at the Neverland Ranch.

The movie stinks, but at least the old lady is a pretty cool movie villain.

WHAT I LEARNED TODAY: Filmed under the title "Monstrosity" and later promoted with the title "The Atomic Brain," it should be re-released today under the new title "Escape From Cher's House."
No comments:

"President Barack Obama's selection of this Southern city [Charlotte, N.C.] for the 2012 Democratic convention signals he will try to reassemble his diverse coalition of 2008 supporters and fight for the conservative-leaning states that helped him win the White House...The convention's apparent theme - The People's Convention - indicates that the president will try to rekindle the grass-roots flavor of his groundbreaking 2008 bid."

* "The People's Convention" Party is a socialist former political party in Ghana, that merged with others to become the Convention People's Party, which advocates socialist revolution.

* Today "The People's Convention" is a radical protest group promoted by The Socialist Worker, which bills itself "A Revolutionary Anti-Capitalist Paper In Britain."

* And, ironically, "The People's Convention" was the name of a mass protest organized by a coalition of 70 communist and socialist community organizations to picket the 2000 Democrat National Convention for not being liberal enough.