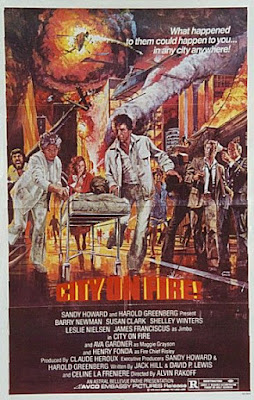 If there's one thing the 1970s did better than Bigfoot movies, it was all-star disaster movies.

But on film we end up with "City On Fire," a 1979 bomb about a city that bursts into flames because of the oil refinery that's located in the heart of downtown for some reason.

Neilsen is the mayor of a generic Midwest city who decides to build an oil refinery in the middle of his city. A disgruntled employee sabotages the equipment and several reels of stock footage and a pneumatic catapult rental later the entire city is in flames.

It's up to a hard-drinking reporter trying to get her career back on track (Gardner,) an in-charge fire chief (Fonda) and a sassy nurse (Winters) to save the survivors who are now trapped in a hospital surrounded by the firestorm.

Despite the talented cast, even they can't save the film from hammy acting, bad special effects and tons of stock footage. Filmed in Montreal, this "Midwestern" features French language signs and TV stations whose call letters start with "C."

Thankfully it's so bad it's fun to watch.

The film was produced near the end of Neilsen's distinguished dramatic career. He would go on to even greater fame the next year in "Airplane!," a spoof of 1970s disaster films.

What I Learned Today: Midwesterners build their cities out of flash paper and oily rags.

Perhaps hoping to win a gold medal for shamelessness, Al Sharpton took to the pages of The Washington Post to blame Sarah Palin's map showing where she was spending money for a shooting by someone who never saw it.

Sharpton. Accusing others of inspiring murder through inflammatory words.

Google "Tawana Brawley," "Freddie's Fashion Mart murders" and "We will not stand by and allow them to move this brother so that some white interloper can expand his business." For someone so quick to blame his political opponents and demand their free speech rights be revoked, he still refuses to apologize for several incidents in which his own speech has been cited in a mass murder and a libel suit he still refuses to pay.
No comments:

The media backlash continues to grow

Liberals are quickly making their shameless reaction to the Tucson shootings their new Wellstone funeral.

The Arizona Republic calls out Pima County Sheriff Clarence Dupnik for blaming political speech by those he disagrees with, when in fact the gunman was completely detached from reality, was a "left-wing liberal" obsessed with Gifford since 2007 and his own department ignored months of repeated death threats from the gunman.

"...Dupnik stood before the cameras interpreting the shootings as politically motivated, despite an increasing weight of evidence depicting the shooting suspect, Jared Loughner, as a mentally ill young man who rambled incoherently about pervasive bad grammar and other apolitical obsessions," the Republic writes in a Jan. 12 editorial.

"...Still, Dupnik used the opportunities to blame Arizona's lax, new gun laws and, again, the angry "rhetoric" of talk radio...With each passing hour, we learn more about the 22-year-old suspect. And everything we learn adds to the profile of a deeply troubled young man detached from reality. There is nothing to date that suggests any partisan motivation for his crimes, whether right-wing or left.

"Dupnik needs to recall that he is elected to be a lawman. With each additional comment, the Democratic sheriff of Pima County is revealing his agenda as partisan, and, as such, every bit as recklessly antagonistic as the talk-show hosts and politicians he chooses to decry."

Mentally unstable cartoonist Ted Rall claims Tucson shootings the "premature ejaculation" of a right-wing revolution, citing the Feb. 2010 plane crash into an Austin, Texas IRS building and the Sept. 2010 attack on the Discovery Channel's headquarters in Silver Spring, Md. by a gunman claiming to have a bomb.

More importantly, he was a mentally ill wacko who didn't follow a set political agenda.

As for the Discovery Channel attack, James J. Lee tried to blow up the network because they weren't aggressive enough in blaming humans for global warming. His manifesto extensively cited Al Gore and the population control beliefs of environmentalist (and Democrat-supporting) groups like the League of Conservation Voters.

More importantly, he was just a wacko who wasn't ordered to do it by any political figure.