Rep. Gohmert: Breitbart's death a loss to ‘nation and freedom’ - The Hill's Video

Rep. Gohmert: Breitbart's death a loss to ‘nation and freedom’ - The Hill's Video
No comments:

Obama bank rules mean no free checking for the poor 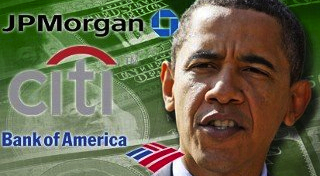 “Bank of America Corp. is working on sweeping changes that would require many users of basic checking accounts to pay a monthly fee unless they agree to bank online, buy more products or maintain certain balances,” The Wall Street Journal reports this morning.
“The search for new sources of income is especially pressing at Bank of America, where 2011 revenue dropped by $26.2 billion, or 22%, from its 2009 level.”

Why is revenue dropping?

“The fee experiments exemplify some unintended consequences of the 2010 Dodd-Frank financial-regulation overhaul, which clamped down on certain revenue sources of banks and motivated them to seek ways to make up the difference,” the Journal reports.

“The overdraft decision came just months before the Dodd-Frank law halved what financial institutions could charge merchants for accepting credit and debit cards. That took away $2 billion in annual revenue from the bank,” the Journal reports.

“The double hit prompted bank executives to look for new revenue ideas that could be fast-tracked because the outlook for the bank’s consumer operations was so bleak, said one person familiar with the planning. That was when it came up with the idea of a $5 monthly fee on certain customers who used their debit cards. It was a plan that could be implemented quickly and wouldn’t require a lot of new technology.”

Banks’ offers of free checking were intended to attract younger customers, but benefitted the poor at large.  Banks continued to offer it despite the loss because many account holders kept their business at that bank once they became more affluent as they got older.  Customers who once had free checking accounts would take out loans, purchase CDs and move up to charged checking accounts with more services. That’s where the banks made their money.

But unable under Dodd-Frank to make any more money off more affluent customers, which Obama saw as “profiteering,” banks are now forced to soak the young and poor to stay in business.

Thanks, Obama.
No comments: