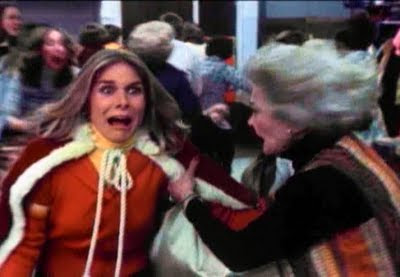 The 1970s Bigfoot movie is a proud genre of film and sadly, "Snowbeast," a 1977 made-for-TV flick starring Clint Walker of "Killdozer" fame, is probably as good as they get.

Actually, it's not bad for a 1970s TV movie about Bigfoot. Of course, that's kind of like saying not bad for a homeless meth addict.

Typical monster movie. Large group of people with backstories gather at ski lodge for the Winter Carnival. Something is either killing people, or tearing their clothes and spilling red tempera paint.

SPOILER: In the film's climax, the man overcoming personal problems kills Snowbeast by stabbing it in the heart with a ski pole. In an odd coincidence, Clint Walker nearly died six years earlier when a ski pole pierced his heart. Being Clint Walker, he was back at work filming in Spain just eight weeks later. The ski pole never recovered.

What I'll Learn: Snowbeast is impervious to inflation, gas lines or hostage crises. He just keeps on truckin'.
No comments: Share this!