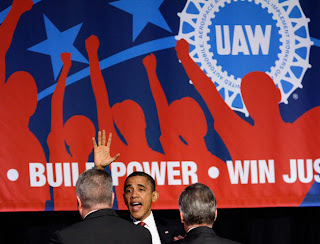 As if you needed any more proof of why it's a bad idea for government to run businesses, The Daily Caller reports after Obama took control of General Motors in 2009 the Obama administration canceled pensions for Delphi auto retirees, but only for the retirees who were not members of the union that funded Obama's election.


Emails obtained by The Daily Caller show that the U.S. Treasury Department, led by Timothy Geithner, was the driving force behind terminating the pensions of 20,000 salaried retirees at the Delphi auto parts manufacturing company.

The move, made in 2009 while the Obama administration implemented its auto bailout plan, appears to have been made solely because those retirees were not members of labor unions.


Twenty thousand of its workers lost nearly their entire pensions when the government bailed out GM. At the same time, Delphi employees who were members of the United Auto Workers union saw their pensions topped off and made whole.


The internal government emails contradict sworn testimony, in federal court and before Congress, given by several Obama administration figures. They also indicate that the administration misled lawmakers and the courts about the sequence of events surrounding the termination of those non-union pensions, and that administration figures violated federal law...

...The emails TheDC has obtained show that the Treasury Department, not the independent PBGC [Pension Benefit Guaranty Corporation,] was running the show.
Under 29 U.S.C. §1342, the PBGC is the only government entity that is legally empowered to initiate termination of a pension or make any official movements toward doing so.

Instead of the "shared responsibility" Obama so often speaks of, Obama singled out non-union retirees for punishment while those whose union dues funded his election were rewarded with full pensions.

Gov. Rick Perry today released the following statement on the decision by the 5th Circuit Court to vacate the EPA's disapproval of Texas' flexible permitting program:

"This decision is a big win for jobs and a big win for Texas. Our state has demonstrated you can cultivate jobs while cleaning the air, and this finding affirms that states have the right to develop permitting processes that balance the priorities of protecting the environment and allowing our industries to thrive. It's unfortunate we had to go to such extremes to fight back against this troubling trend of overreach and reckless political activism by the Obama Administration that shows no regard for the impact on jobs or our economy."