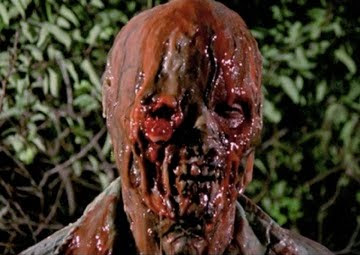 Movies about astronauts exposed to radiation and becoming monsters don't have a good track record.

And now "The Incredible Melting Man."

This 1977 turkey, one of IMDB's "Bottom 100," is the tale of the lone survivor of a three-man mission to Saturn that turns him into a murderous monster. He only kills a few people, all in brief shots, over the span of 84 minutes so strap in for 82 minutes of meandering, pointless filler.

While orbiting the planet, Steven West and two other astronauts are attacked by stock footage. The movie fails miserably to explain what happens, much less how he managed to make the seven-year trip back to Earth from Saturn all by himself while unconscious and in what appears to be just a few hours. The unconscious West awakens in a military hospital. There he finds he's been exposed to radiation and his flesh is melting away.

That's all he needs to know to go on a murderous rampage. His first victim is the nurse who finds him, who he chases in slow motion for no reason. West is followed by groovy doctors who try to stop his poorly-directed campaign of bloodshed and plot holes.

There's one scene where West tears off the head of a fisherman who looks like Eddie Deezen. He tosses it into a river and it bursts open like a cantaloupe when it hits rocks.

There's also a scene where he kills an elderly couple after what has to be ten excruciating, pointless minutes of the two talking about nothing. It's not a good idea to make your audience want the victims to die.

There's also an inexplicable scene in which a man is thrown into power lines and several pointless minutes where you're forced to watch a woman knit.

The film ends with a janitor calmly scooping up what's left of West and tossing him into a trash can.

The movie stinks. It's five pounds of movie in an eighty pound sack. At least the makeup effects are pretty good for a low budget 1970s film, of which I seem be to watching a lot of.

One of the victims is a young Jonathan Demme. One can only imagine the horrors of appearing in this film led him to direct "Silence of the Lambs."

"The Incredible Melting Man" was originally meant to be a parody of 1950s horror films but the studio changed directions in the middle of filming and decided to make it a serious film. Unsurprisingly the studio was American International Pictures, which churned out hundreds of exploitation and cheap drive-in films between the 1950s and 1970s. They figured out the secret to profitable film making was it could be as cheap and poorly-made as possible, but if you produce something a 19-year old boy will like it will make money.

Questions That Need Answers And Other Observations:

Saturn looks a lot like public domain footage of the Earth and solar flares.

So, the explosion or whatever it is kills his crew and knocks him unconscious, but he manages to fly back to Earth from Saturn? (The trip would take seven years in real life.)

Why are they using time-lapse photography in a real-time scene?

Why did they mike the grocery bag?

They shot a couch, skinned it and made curtains out of it.

Half of the dialogue in this movie has nothing to do with the movie.

Was there any editing?

Why do you have random gawkers at a crime scene in the middle of the wilderness?

Wait, his hospital pajamas were dark blue, and now they're white? Apparently the monster killed the continuity guy.

Another scene shot in slow motion for no reason. I'm not kidding when I say I think they're using slow motion to pad out the length of the film.

And another pointless scene that doesn't advance the plot to pad out the film.

Another pointless flashback to the space accident scene? That's the third time. How badly did they come up short in the pre-release run time?

Okay, I'm halfway through the movie and they still haven't explained what happened or what's going on. I'm beginning to think the director made a really cool movie, lost the film, and replaced it with surveillance footage of his life.

Was anything cut from the film? This thing is 2% plot and 98% people just standing around doing nothing.

And we flash back to the space flight for a fourth time. Still nothing happening in this movie.

I think the monster killed the movie's editor.

Yet another scene of pointless, rambling, inane conversation and nothing happening?

The movie is three-fourths done and they're finally getting around to actual plot points?

Was this an anthology of ten short, plotless films?

Did everyone look like Gabe Kaplan in the 70s?

Finally, something happens! She chops his arm off and he runs away. Unfortunately the scene just runs on as she falls against a wall and cries for a long time. You can cut away now. Anytime. Next scene? GET ON WITH IT!

His pistol turned into a shotgun?

Wait. He gets STRONGER as he melts? Then why did his arm fall off when it was fanned at with a kitchen knife?

Apparently the human body is 70% fireworks and flash paper.

So, the janitor find a pile of blood, tissue and organs and just scoops it up and tosses it in the trash like its perfectly normal? What kind of power plant is this?
No comments: Share this!