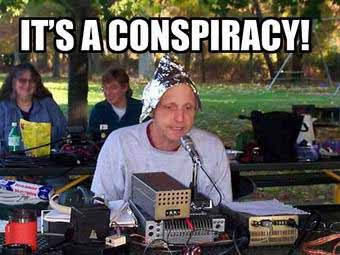 Put on another layer of tinfoil and prepare to accuse Karl Rove when your car doesn't start. "Democrat Underground's Conspiracy of the Day!" is back!

The senseless murder of former Reagan administration and *gasp!* Bush administration official John Wheeler, and the weird but not impossible mass deaths of redwinged blackbirds in Beebe, Arkansas...

...only on Democrat Underground would they be linked through what is clearly a Republican conspiracy to kill us all in this thread, "Top US official murdered???,,,Arkansas bird kill related?"

Democrat nutroots, quoting a European internet site, have concluded that since Wheeler once did a subcontracting job for the Mitre Corporation, then clearly he was murdered by the new Republican Congress because he was going to blow the whistle on their plans to gas the American people. All those dead birds was just one of the tests.

Let's see if we can follow this winding path of paranoia and delusion.

1) James Wheeler did a consulting job for the Mitre Corporation two years ago and once wrote about the effectiveness of chemical weapons decades ago.
2) Mitre is developing the navigation systems for drones that our military is clearly using to wage chemical warfare against the Afghan people (citation needed.)
3) A bunch of red-winged blackbirds died somewhere in Arkansas.
4) Clearly they were poisoned by the eeeeevil military in a test of their chemical-warfare-against-civilians plot (citation needed.)
5) Clearly, James Wheeler knew about this, seeing as he is one of the literally hundreds of thousands of people who once did work for the corporation that supposedly designed the navigation systems for the eeeeevil military's supposed war-on-civilians drones (citation needed.)
6) So clearly, James Wheeler's death was a hit ordered by the new Republican Congress to cover up their super-duper-top secret bird killing planes.

If that's not scary enough, these are the same people who want to make your health care decisions for you.

Some of the better comments.

"ahh, a chem attack that makes more sense...The timing would be interesting also, around the change over of congress" Poster "RandomThoughts"

"Can't ignore this one" Poster "JohnnyLib2"

"Makes perfect sense now, not news to the media I have no doubt but I also have no doubt if this story gets big it will soon be made to be seen as a joke" Poster "AuntPatsy"

"[Wheeler had] an inside view of USAF/CIA drone contractors, such as . . . wait for it . .Blackwater/Xe Services and all the associated goings-ons. You know, the post-9/11 "Global Assassinations Are Us" people. If we want to get really far-ranging, there was the suicide bombing that took out the CIA Predator team at that base in Afghanistan who was let into the compound after the Xe Guards (and the CIA's own security people) didn't search the bomber." Poster "leveymg"

"well, that does seem to make some sense. it didn't seem the end of the world was coming (unless of course we kill ourselves), nor did shooting guns on New Year's sound plausible. Follow the money, as they say." Poster "WhiteTara"
No comments: Share this!

The Gentlewoman from the State of Denial

“Deficit reduction has been a high priority for us. It is our mantra, pay-as-you-go,” said Pelosi. 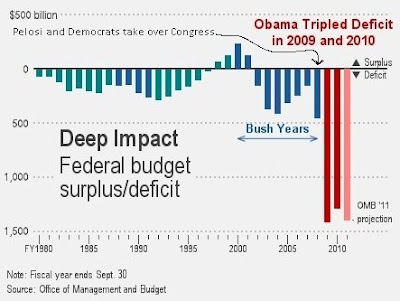