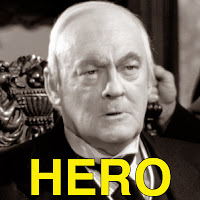 Henry F. Potter is the hero of "It's A Wonderful Life."

And George Bailey is it's greatest villain.

See, George was handing out home loans to people who couldn't afford to pay them back.

Eventually that's going to catch up to Bailey Building and Loan, which will go under and require a taxpayer bailout.

George's home loans will be taken over by a responsible lender, who will foreclose on the past due mortgages.

Mr. Potter, however, only made loans on reasonable terms and to people who could pay, keeping Bedford Falls afloat.

While Pottersville had bars and nightclubs, it also had a stable residential base allowing it to maintain infrastructure and a police force much like Las Vegas.

George, on the other hand, turned Bedford Falls into Detroit.

Which is better-run and a safer place to live, Las Vegas or Detroit?

Sam had to take out that kind of money against his business.

And if Sam Wainwright's business fails because of George's irresponsibility everyone at that soybean factory loses their job, setting off a new round of bankruptcies and foreclosures in Rochester.

George Bailey is an economic leper, infecting all who do business with him.

Henry F. Potter is the only thing keeping Bedford Falls, and apparently much of New York state, out of the mouth of hell.