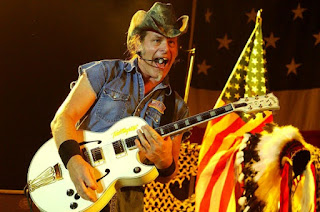 “Hey patriots.  This is Ted Nugent celebrating the Second Amendment and freedom and the American, Texas way every day of my life.  Congressman Steve Stockman is an upgrade that America needs desperately.  Texas should lead the way with my buddy Congressman Stockman,” the always-entertaining Nugent said, imploring his fellow Texans to support Stockman.

Tired of high taxes and seeking freedom, Nugent moved from Michigan to his ranch in China Spring, Texas.

“Ted’s certainly more colorful than I am, but I’m proud to have Ted Nugent’s support,” said Stockman. “I’m the only proven conservative and the most conservative congressman in Texas.  I’ll do to the Obama agenda what Ted does to a whitetail – I’ll drop it where it stands and then gut it.”

Nugent also promoted a Right to Keep and Bear Arms BBQ in Bridge City for Congressman Stockman that turned out a steady crowd to enjoy good food and conservative principles.

Congressman Stockman is the only candidate for Congress in the 36th District endorsed by pro-gun
groups, endorsed by Gun Owners of America.  The 36th District covers all of Chambers, Liberty, Hardin, Orange, Newton, Jasper, Tyler and Polk County, and the southeastern portion of Harris County including Baytown, Pasadena and the Johnson Space Center.