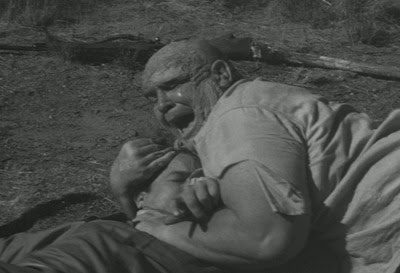 I have never been able to make it through this entire movie, and that's coming from someone who woke up early on opening day to see "Gigli" in the theater.

"The Beast of Yucca Flats" is written and directed by the (in)famous Coleman Francis, so you know right away you're going to be treated to bleak, depressing actors thrown into a bleak, depressing New Mexico landscape, and an airplane will somehow be involved.

But this film is even bad by Coleman Francis standards, even with Tor Johnson in the lead role. Really bad. As in, possibly the worst ever made. At least "Plan 9" had some charm and "The Creeping Terror" was inoffensive. This movie is just a painful stabbing of the eyes.

If untreatable, soul-crushing depression could be captured on film, it'd have a three-picture deal with Coleman Francis.

Long story short, the movie opens with a a naked woman being strangled. No explanation of why, and by the time the film ends, you never get one. It pretty much had nothing to do with the film, and it was reportedly added after the film was completed by Francis. For some reason Coleman Francis films tend to include scenes of women being shot or killed for no real reason.

The movie picks up from there as Tor Johnson is a defecting Soviet scientist. As he arrives he and his military escorts are attacked by KGB gunmen. Tor mall-walks away from the mayhem and into the desert.

Lost, he wanders onto a nuclear test range where an atomic bomb is being tested. No fences or security or anything. Bomb goes boom, Tor goes radioactive and Soviet scientist is transformed into a murderous monster.

That's where any attempt at a coherent plot ends. Tor kills some people, the police shoot other people, and since this is a Coleman Francis film, not only is the lead character shot in the end, he's shot from an airplane.

Yes, just like in "Red Zone Cuba." Coleman ripped off his own endings.

This movie reeks, even when compared to other Coleman Francis films. At least "The Skydivers" had some tension and "Red Zone Cuba" had an interesting plot.

"The Beast of Yucca Flats" appears to be something Coleman just made up on the spot when he somehow got Tor Johnson. He didn't even try (actors who were shot by gunmen just stop acting like they were shot.) In fact, it was filmed with no dialogue or sound. Everything was just dubbed in later.

I don't say this lightly, but "The Beast of Yucca Flats" could be the worst movie ever made.

What I Learned Today: Standing next to a nuclear blast doesn't kill you, it just gives you anger management issues.
No comments:

Because we all know how much a Communist and an anti-Israel leftist loved listening to a nine-month old Sarah Palin, and how it's all somehow linked to a non-political act by a schizophrenic obsessed with grammar.
No comments: