Magazine that lectured you on civility asks why GOP is 'so dumb?'

This is not a joke or a Photoshop job.  This is the actual cover of the next issue of Newsweek.

Not to be outdone, TIME will launch an investigative report as to whether John Boehner is a doo-doo head booger eater. 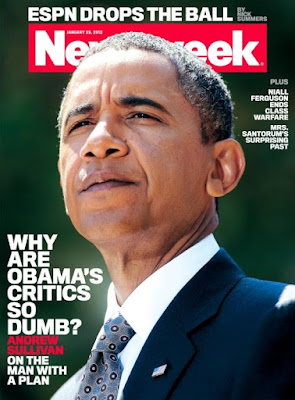 The Occupy Wall Street crime spree keeps growing.  Add breaking and entering, trespassing and grand larceny to the list, and the victim is a single dad who now has nowhere to live.

Yes, it's Occupy Wall Street, not banks, now coldly and cruelly throwing families into the streets.

OWS decided to stage a publicity stunt by "occupying" a "vacant home and "donating" it to a "homeless" family.

But there are several problems with their latest crime:

1) Instead of occupying a vacant home, they targeted the home of a single dad struggling to negotiate his mortgage, knowing he was an easy target who couldn't fight back.  They broke into the house, then staged a publicity stunt where they called out the media to witness them "giving" the home to a "homeless family."

2) The "homeless family" is actually the family of a OWS activist.

3) The "homeless family" the house was supposedly given to don't live there.  They say it isn't big enough for them.  Instead, OWS broke into someone else's house just so they could keep it for themselves.

So what you have is a group of violent criminals stealing a house out from underneath a single, struggling father for the purposes of a fake publicity stunt, then keeping the stolen property for themselves.  This is what I'm talking about when I refer to OWS as violent, subhuman animals.
No comments: