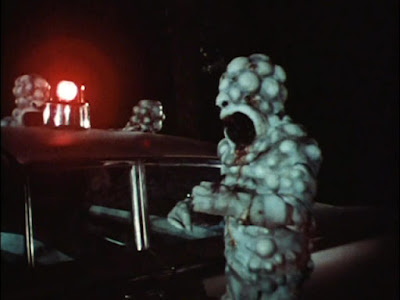 It's what it sounds like. Aliens made of eyeballs. And it's a 1965 remake from American International Pictures, of a 1962 AIP TV movie, so you know it's doubly low budget and sloppy.

Long story short. Eyeball-covered aliens invade backwoods town one night. The eyeball-covered aliens kill people. Teens uncover the evil goings-on. Fussy authority figures don't believe them, and blame them for the deaths. Teens save the town by turning their car headlights on the monsters, which causes them to explode.

I should say two long stories short. The military has been tracking the aliens and his on to everything. They surround the saucer, but in the end the teens stop the aliens. I have no idea why the entire military plot was even needed.

It's even dumber and more agonizing to watch than it sounds.

For one, if light causes the eyeball aliens to explode then the entire invasion will be wiped out in the morning. They'd be the first movie villains stopped by planetary rotation. And for a race of beings advanced enough to master intergalactic travel, why are they stupid enough to invade a planet they can only stay on for 10 hours?

The movie takes place at night, but many of the scenes are shot in broad daylight with no effort to even pretend it's night.

Oh, and the movie was originally produced the title card read "The Eye Creatures." When B-movies are re-released, the title is often changed by adding, in this case "Attack Of." Unfortunately the editor had ADD because he pasted "Attack Of The" to the top of the title card.

Hence, we are informed we are watching "Attack Of The The Eye Creatures."

I hate you, movie.

The movie stinks, but it does have one star. Peter Graves has an uncredited role as the narrator in the opening scenes.

The film was directed by AIP mainstay Larry Buchanan as a color remake of an old black-and-white AIP film, intended for TV broadcast. According to Buchanan, AIP told him "We want cheap color pictures, we want half-assed names in them, we want them eighty minutes long and we want them now."

When Buchanan died in 2004, The New York Times eulogized him by writing, "One quality united Mr. Buchanan's diverse output: It was not so much that his films were bad; they were deeply, dazzlingly, unrepentantly bad. His work called to mind a famous line from H. L. Mencken, who, describing President Warren G. Harding's prose, said, 'It is so bad that a sort of grandeur creeps into it.'"

New Jersey Gov. Chris Christie vetoed a bill that would have made his state the first in the U.S. to re-introduce online gambling. But he also suggested the state Legislature could revive the effort by asking voters to approve the measure by referendum.

The bill would have allowed New Jersey residents to place bets through websites run by casino companies in Atlantic City, the only place gambling is allowed in New Jersey under the state constitution. State legislatures across the country have started work on similar bills in a bid to generate revenue.

Bad move, Governor. Government should prohibit free people from doing what they please with their own earnings. Between this and supporting Michelle Obama's federal food police he's beginning to show a nanny-state streak.
No comments:

Union thugs find out seven Republican senators, including President Tom Niehaus were eating in a Columbus cafe. Led by an official of the SEIU (whose members were arrested in a savage assault on a black Republican in St. Louis in 2009) they stormed the restaurant, bellowed "something nasty" and began screaming like mental patients.

One union thug vandalized the restaurant's windows while others physically assaulted restaurant staff.

The frightened restaurant owner called 911. Several police officers and a police helicopter, which is typically the response to a riot, had to be called in response to the liberal violence.

Stu Rothenberg asks the thought-provoking question, how sycophantic and fawning would the media be if it were Republicans hurling hate speech at the governor or fleeing the state to prevent Democrats from voting on a bill?

Cuccinelli, Allen & Ferguson on "The Score" with Scott Lee

Be sure to tune in to "The Score" radio program with Scott Lee this weekend.

You can hear "The Score on the air across Virginia or online nationwide at:

I'll be discussing states voting to nullify the Endangered Species Act and the small steps liberals are taking in their drive to put government in control of everything and crush individualism by outlawing incandescent light bulbs and mandating low-flow toilets.

Liberal political cartoon on NPR website shows Republicans preparing to chop the heads off children. The comments sections asks you to "Please keep your community civil."

Captain John Sowers Brooks, defending Fort Defiance in Goliad under the command of Colonel Fannin, writes the following letter to his sister which reads in part:

"...My profession, perhaps for life, be it short or long, will be that of arms. It is the only pursuit in which I could feel a throb of interest; and the cause in which I now exercise it, renders it still dearer, and more ennobling to me. It is the course of Liberty, of the oppressed against the Tyrant, of the free man against the bigoted slave, and, what recommends it more strongly to me, of the weak against the strong. If I fall, let me fall---It is one of the chances of the game I play-a casualty to which every soldier is liable. My prayer has been, since my earliest recollection, to die on the field of battle, with the shout of victory in my ears; and, if it is the will of high Heaven, that that fate should meet me now, I will not murmur and you should not...

"...Santa Ana's army is now in motion, and our almost unprotected frontier, is the destined goal of its operations. One of his divisions has already attacked Bexar, the town which was surrendered to the Americans, ou the 18th Dec. 1835, by the Mexican General, Cos, which garrison consisted of only 156 Volunteers, who retreated to the Alamo, a strong fortress in the suburbs, and still held out, at our last intelligence. 'Davy Crockett' is with them. The Mexicans amounted to 2000. We started with 300 men to their relief, but found it impossible to proceed, from the want of horses or oxen, to transport our baggage and artillery...

"...We suppose their force [DF notes: marching to Goliad] to be from 1500 to 3000 men. We have but 500-all Volunteers. But we are resolved to die, to a man, under the walls we have thrown up, rather than surrender to a horde of merciless savages, who have declared their determination to adhere to none of the rules of civilized war fare; but to murder all Americans, indiscriminately. Capt. Pearson and several others were shot down, after they had surrendered at San Patricio. This on the part of the enemy, is to be a war of extermination, not directed solely against the armed soldiers in the field, but against the peaceful citizen, the helpless female, and the defenceless infant. They show no quarter; we do not require it; and, indeed, both parties seem to have tacitly contracted, that it shall neither be asked nor given. Let them pursue their course of ruthless cruelty; they will encounter spirits as stern as their own; they will find, if retaliation requires it, that we can be as deaf to the calls of mercy as they can be. If victory favors us, ample shall be their retribution, for the murdered volunteers at San Patricio...

The Convention of 1836, meeting at Washington-On-The-Brazos to declare Texian independence from Mexico and lay the foundation for the Republic of Texas, names former Tennessee Governor Sam Houston commander-in-chief of the Texian Army.

Whereas we are now in a state of Revolution, and threatened by a large invading army, from the central government of Mexico; and whereas our present situation, and the emergency of the present crisis, renders it indispensably necessary that we should have an army in the field; and, whereas, it is also necessary that there should be one Supreme head or Commander in Chief, and due degrees of subordination defined, established and strictly observed,

Therefore, be it Resolved, that General Samuel Houston be appointed major general to be Commander in Chief of all the land forces of the Texian Army, both regulars, volunteers and militia, while in actual service, and endowed with all the rights, privileges and powers due to a Commander in Chief in the United States of America, and that he forthwith proceed to take command, establish headquarters and organize the army accordingly and that Samuel Houston retain such command until the election of a chief magistrate of this government, and to continue in such office unless, superseded by order of the government, subject, however, to the general orders of the government de facto, until the general organization agreeable to the constitution, and always amenable to the laws and civil authorities of the country.

(Thomas would be named the Republic of Texas' ad interim Attorney General and acting Secretary of War. He would later be killed, accidentally shot as he and others fled Mexican troops in the Runaway Scrape.)