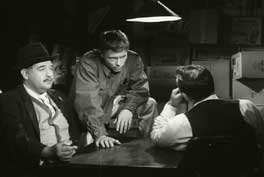 Marv is a total loser who looks like he was put together by a committee, and lives with an alcoholic dad. He also loves the very pretty Betty.

Betty pretends to love Marv, but she really loves bad guy Vince and his just using Marv to get out of writing an English paper. Betty dupes Marv into writing the paper for her. When the teacher finds out, Marv loses his college scholarship.

Wow. Lesson learned about trust. And...what? The movie's not over yet?

Oh, yeah. It gets more depressing.

Marv overhears a drug transaction at the docks. He's supposed to be a really smart kid, but for some reason this dope, still in love with Betty, tells her about his plans to steal the drug money hoping it will win her back.

The cold, manipulative Betty, of course, tells Vince, who plans to rob Marv.

Marv is a moron.

And you'll need Xanax to get through the rest of this.

Marv is a moron.

This movie isn't just awful, between everyone dying or going to prison, and its central message of never-trust-a-woman, it's bone-crushingly depressing. This thing makes "Precious" look like "Rocky 4."

Oh, before the movie was released the actor who played Marv died in a car wreck and wasn't found for three weeks. He was considered to be a future star.

Still haven't given up?

The movie stunk even though it was a total rip-off of Stanley Kubrick's "The Killing," released just three years earlier.

What I Learned Today: Most armed robbers started out in plagarism.
No comments: Share this!

“Americans sent Obama a message in November – stop spending and get government out of the way. He did not hear you. His address Tuesday night was a tone deaf performance orchestrated by Big Green.

“Families are struggling with joblessness and rising prices, but Barack Obama chose to side with the radical green activists who are driving up costs and driving out jobs. Obama coldly ignored families and instead warmly embraced the radical green activists responsible for fewer jobs and higher prices. In November they demanded Washington cut off the special interest cash spigot. Instead Obama demanded Congress shower his Big Green allies with billions in new spending. Obama’s green agenda is a red light stopping economic growth.

“Obama’s demand that 80 percent of the nation’s power come from expensive, inefficient experimental sources is a prescription for disaster. Time and time again, Expensive Energy Mandates have always proven to jack up utility bills and kill jobs.

“Americans want Congress to deliver a ‘shellacking’ to Obama’s job-killing green agenda. His proposal for billions in new spending is just a rehash of his failed ‘stimulus’ boondoggle that poured mountains of cash into failed ‘green’ experiment. Defending federal bureaucrats like the EPA and wasting billions on green experiments are precisely what Americans rejected in November.

“Obama openly admitted his ‘green energy’ spending plan will cause your utility bill to, in his own words ‘skyrocket.’ His ‘green jobs’ spending spree proposal has been proven time and time again to be a jobs-destroying black hole. His plan to supposedly cut red tape includes massive loopholes allowing bureaucrats to exempt virtually every expensive regulation and he continues to defend the EPA’s plans to chase jobs overseas. People wanted to hear what he would do to get government out of the way of economic recovery. They were instead pounded with repeated calls for the same government waste, meddling and explosive spending that got us into this mess.”

Obama’s quotes are taken from an advance copy of the speech released by the White House.

Founded in 2007 as Western Tradition Partnership and launched nationwide in 2011 as ATP, the group is supported by grassroots members from across the nation. ATP is a fast-growing non-profit organization dedicated to fighting environmental extremism and promoting private property and responsible development and management of land, water, and natural resources.

STATE OF THE UNION: SEPARATING FACT FROM GREEN FICTION

OBAMA’S GREEN FICTION: “We’ll invest in…clean energy technology – an investment that will strengthen our security, protect our planet, and create countless new jobs for our people… I challenge you to join me in setting a new goal: by 2035, 80% of America’s electricity will come from clean energy sources.”

RENEWABLE ENERGY KILLS 2.2 JOBS FOR EVERY JOB IT CREATES

(George Will, The Washington Post, ‘Tilting at green windmills,’ June 25, 2009)
“(Gabriel) Calzada, 36, an economics professor at Universidad Rey Juan Carlos, has produced a report that, if true, is inconvenient for the Obama administration's green agenda, and for some budget assumptions that are dependent upon it.
“Calzada says Spain's torrential spending -- no other nation has so aggressively supported production of electricity from renewable sources -- on wind farms and other forms of alternative energy has indeed created jobs. But Calzada's report concludes that they often are temporary and have received $752,000 to $800,000 each in subsidies -- wind industry jobs cost even more, $1.4 million each. And each new job entails the loss of 2.2 other jobs that are either lost or not created in other industries because of the political allocation -- sub-optimum in terms of economic efficiency -- of capital. (European media regularly report "eco-corruption" leaving a "footprint of sleaze" -- gaming the subsidy systems, profiteering from land sales for wind farms, etc.) Calzada says the creation of jobs in alternative energy has subtracted about 110,000 jobs elsewhere in Spain's economy.”
Source: George Will, The Washington Post, ‘Tilting at green windmills,’ June 25, 2009

A deal for a $900 million “wind farm” in Iberdrola, California was struck down by an administrative law judge who ruled “the Manzana Wind Project is not cost-competitive and poses unacceptable risks to ratepayers” and “it will subject the ratepayers to unacceptable risks due to potential cost increases resulting from project under-performance, less than forecasted project life, and any delays which might occur concerning transmission upgrades and commercial online date.”

The Manzana debacle is just one of many that plague the expensive, inefficient “wind energy” lobby.

SOLAR POWER PROVES TO BE A DIM DEAL

A solar power company went belly-up even after Massachusetts taxpayers showered it in $58 million in subsidies, and officials gave it a sweetheart $1 a year lease.

“Evergreen Solar Inc., once a poster-company for Gov. Deval Patrick's green-jobs agenda, announced plans on Tuesday to shutter its Devens manufacturing plant and move more than 800 jobs elsewhere after accepting $58 million in state subsidies to expand in Massachusetts…

“…The company accepted $58.6 million in grants, loans, land, and tax incentives over the last few years as incentive to expand in Massachusetts and add at least 350 new jobs to the economy.”

Massachusetts is just the latest state to discover “solar” power is expensive, inefficient and a jobs killer.

OBAMA’S GREEN FICTION: “To reduce barriers to growth and investment, I’ve ordered a review of government regulations. When we find rules that put an unnecessary burden on businesses, we will fix them.”

ATP’S FACTS: Obama’s regulatory review includes loopholes allowing bureaucrats to exempt even the costliest regulations, and is nothing more than a do-nothing attempt to fool employers.

“Among many others, the Environmental Protection Agency said in a statement that it was ‘confident’ it wouldn't need to alter a single current or pending rule…

“Perhaps the EPA's confidence owes to a little-noticed proviso in Mr. Obama's order. When the agencies weigh costs and benefits, the order says, they should always consider ‘values that are difficult or impossible to quantify, including equity, human dignity, fairness, and distributive impacts.’

“Talk about economic elasticities. Equity and fairness can be defined to include more or less anything as a benefit. Under this calculus, a rule might pass Mr. Obama's cost-benefit test if it imposes $999 billion in hard costs but supposedly results in a $1 trillion increase in human dignity, whatever that means in bureaucratic practice. Another rule could pass muster even if it reduces work and investment, as long as it also lessens income inequality…

“… The current EPA is a perfect case study. One of Administrator Lisa Jackson's top priorities is ‘explicitly integrating environmental justice considerations into the fabric of the EPA's process,’ as a July 2010 memo to all senior regulators put it.

“‘Environmental justice’ is the left-wing grievance movement that claims pollution has a disproportionate effect on minorities and the poor. Ms. Jackson's memo introduced new regulatory guidance—that is, rules about how to make rules—so every EPA action has ‘a particular focus on disadvantaged or vulnerable groups.’

“Ms. Jackson wrote that a new goal for rulemaking, enforcement and permitting is to have ‘a measurable effect on environmental justice challenges.’ But these amorphous concepts are not measurable at all. According to this guidance, EPA must nonetheless consider them when estimating the ‘economic impacts of regulations,’ and even its scientific analysis should "encompass topics beyond just biology and chemistry." So put on your lab coat and complete a randomized controlled experiment in politics.”

'We, The Spiteful': Dems turns their hate on Middle America

You know how I like to point out liberalism is a philosophy founded on a dim view and blazing hatred of your fellow American, a belief system that preaches the liberal is morally and intellectually superior to the moronic cattle?

Well, hear it directly from a liberal.

That quote appears directly underneath a photograph mocking a mentally retarded child.

Malice? Spite? Mean, spiteful jerks? If there's anything liberals do better than condescension, it's projection.