Why I have a begrudging love for that teasip liberal LBJ

"In the early afternoon, the President, with me next to him in the front seat, took his white Lincoln convertible, top down, for a drive around the ranch. It was incredibly hot; the dust clouds made it hard to breathe. But there was relief.

"As we drove around we were followed by a car and a station wagon with Secret Service agents. The President drank Cutty Sark scotch and soda out of a large white plastic foam cup. Periodically, Johnson would slow down and hold his left arm outside the car, shaking the cup and ice. 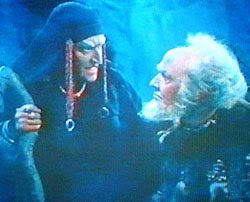 Based on the title, and the movie poster, you'd think it was a sci-fi movie about aliens or a mad scientist, maybe even with Russell Johnson.

It's a joint Russo-Finnish movie based on a Finnish myth about a witch and magical harps.

Lemminkainen isn't a topical ointment, but a legendary Finnish mythological hero. He loves the fair Annikki, who is kidnapped by the evil witch Louhi, not to be confused with the bitter "Family Feud" host.

Louhi wants Annikki's father to build her a "Sampo," which is some fictional Finnish contraption that creates salt, grain and gold. When Lemminkainen tries to stop her, Louhi steals the sun/an extra light from the set, plunging the Earth into frozen darkness.

That's when the villagers get off their collective Finnish duff and create magical harps that turn Louhi into a pillar of salt. Kind of makes you wonder how Lemminkainen got to be such a national hero when he accomplished jack squat and a bunch of illiterate peasants had to do his job for him.

Louhi looks like she's made of clay and a road talks to people. I didn't know peyote grew in Finland. The original title was "Sampo," but was dubbed into English and released in the United States by American International Pictures in 1964, probably as some Soviet plot to destroy our morale.

This movie stinks. And it stinks of cabbage and pickled herring.

What I Learned Today: "The Day The Earth Froze" isn't a cinematic retelling of a popular Finnish myth so much as it's documented evidence of Soviet atrocities.
No comments: