It’s certainly not the most flattering image.

Incumbent State Sen. Gail Schwartz, D-Snowmass, is being portrayed by conservatives as the next Donald Trump. “You’re fired!” states a mailing going out to voters in the Colorado 5th Senate District. The front of the mailing: a photo of Schwartz’s face with the body and trademark hair of Trump Photoshopped into the image.

The argument by the conservative Denver-based Western Tradition Partnership, which is responsible for the mailing and has a national arm extending to Washington, D.C., is that Schwartz’s co-sponsorship of a measure this year that raised the state’s renewable energy standard will result in Colorado residents losing jobs. The group also argues that the higher renewable energy standard — 30 percent by 2020 — will raise utility costs.

“Not only does her special interest energy tax jack up your utility bills, studies show ‘green’ energy destroys 2.2 jobs for every job she claims it creates,” states the mailing. “Thousands of Coloradans — like you — will lose their jobs under Gail Schwartz’s energy tax.”...

Go to http://www.thedenverdailynews.com/article.php?aID=10186 to read the entire article, including a deranged rant by Senator Schwartz in which she attacks the thousands of Coloradans who support us as not being part of the state.

Liberals try to spin "One Nation" vs. Beck photos, crash and burn

After months of building up the "One Nation" rally as something that would be bigger than the Aug. 28 and Sept. 12 conservative rallies on the National Mall, liberals are fuming over these aerial photos of both the "8/28" and "One Nation" events showing the liberal rally was only a fraction the size of the conservative one. 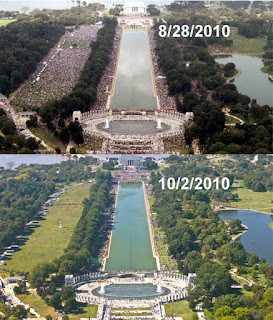 They claim their event was as large as Beck's (after promising it would be bigger) and insist the photo showing what appears to be embarassingly poor turnout was taken in the morning, before the event kicked off.

According their own schedule, they were already at least halfway into their program when the photo was apparently taken.