You know who is the about only group opposed to exempting non-union workers from union-negotiated benefits?  Union bosses.

You see, being "forced" to share benefits with non-union workers, even if they fought to keep it that way, gives them a talking point to whip up opposition to it.

If you're a union member who opposes non-union members getting union-negotiated benefits, your union leaders are your enemy.
No comments: Share this!

Democrats, including Obama, refuse to criticize the violent behavior of these feral animals.

Democrats threaten to kill children of Mich. governor, 'pray your wife gets cancer'

Michigan Governor Rick Snyder has signed a Right to Work bill supported by 58 percent of the state's voters.

So typically, Democrats have reacted by threatening to murder, and even rape, him.

But Democrats are also targeting his wife with death wishes and even threatened to hunt down and kill his children, including his 14-year-old daughter.

Courtesy of Twitchy, here are just a few floats in the liberal parade of psychotic violence.

RT @erikFUCKINGhall @onetoughnerd believe us, you, sue, Jeff, mellisa, and Kelsey will burn for this. You fuck with our families, we kill yours!!!

RT @Offlogic @onetoughnerd you are soooo going to die painfully for this bullshit, it isn't even funny
No comments: Share this!

Democrats promise bloody violence in response to Right to Work

Michigan House Democrats posted this to their Twitter account Tuesday then quickly deleted it, probably when someone informed them advocating literal violence is a crime.

We need to have a serious national discussion of the Democrat Party's increasing use of bloody mob violence as a tool of political discourse. 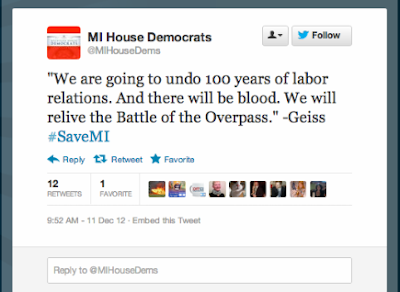 Photo of violent liberal attacker released. Reward for his arrest.

Here is a screen capture of video of the violent liberal who attacked conservative commentator Steven Crowder. 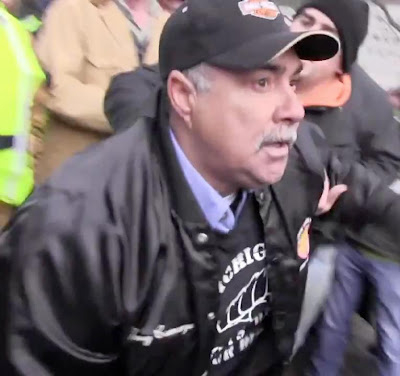 Here is the reward fund for his arrest.

Watch as a mob of liberals act like feral animals, hooting and screaming as they rip down a tent with women and children inside.

These union attacks will grow only more violent, as 76% of Michigan supports Right to Work.  Liberalism has become synonymous with psychotic violence.