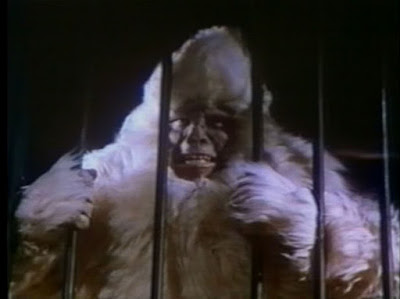 They also gave us a spate of low-budget Bigfoot movies.

So you know Bill Rebane, director of legendary bombs like "Monster A Go-Go" and "The Giant Spider Invasion," had to get in on the action with his own Wisconsin-based film.

Behold, "The Capture of Bigfoot."

Shot in Gleason, Wisconsin, from what I gather it's your typical Bill Rebane movie.

3) Lots of unappealing Midwesterners are killed by puppets.

4) A confused and disappointed audience make their way to the box office to demand refunds.

In this case, said monster is a giant Monchichi that was worshipped by the Indians, who the scenery-chewing villainous businessman is paying some local hunters to capture so he can turn it into a tourist attaction.

So basically the villain is a cross between Monty Burns, Marlin Perkins and South of the Border.

By the power of poor production values and plot holes, it's all somehow resolved in a way no one can explain.

This one's going to hurt.