"Steve Westly, a financier whose money-raising prowess helped to snag him a post on the administration’s energy advisory board, and Matt Rogers, a former Energy Department senior adviser who helped to approve the Solyndra loan, were spotted by reporters at the $35,800-per-person fundraiser for the president’s re-election campaign," The Washington Times reports this morning.

"Mr. Westly sent warnings to the president not to attend an event at Solyndra's headquarters in the Bay area because of shaky finances at the solar energy company, which had received a fast-tracked $535 million federal loan guarantee in 2010 as part of the administration’s economic stimulus program. Mr. Rogers was partly responsible for overseeing stimulus awards at the Energy Department.

"They were among about 60 wealthy donors who attended the fundraiser at the swanky home of progressive activist Quinn Delaney and real estate developer Wayne Jordan, a big Obama bundler, in Piedmont, Calif., near Oakland."

Obama promised the rent-seekers "his re-election would ensure that the government promotes 'smart regulations … that are going to deal with issues like climate change.'"

And that's how Green Crony Capitalism works.  "Green" speculators, knowing their product is a sham, bankroll the election of candidates who will ensure profits with taxpayer-funded bailouts.  Their candidate wins, the candidate votes to shovel taxpayer money into their pockets and then the "green" speculator declares bankruptcy and splits the loot between himself and the "green" politician, which is used to elect even more of them.

It's a vicious cycle of taxpayer money being laundered through "green" companies to finance the election of leftists who will vote to launder more money.  And Obama's running the laundromat.
The only way to break it is to stop taxpayer financing of the "green" energy proven failure.

Blogged at American Tradition Partnership.
No comments: Share this! 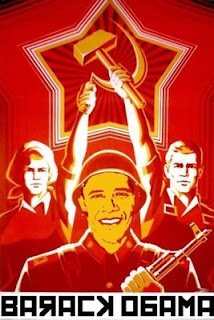 “In a campaign stump speech in Roanoke, Virginia last Friday, President Obama clearly revealed that he believes individual success in this country is largely driven by luck and other people, rather than hard work, ingenuity, or productivity. (The speech is similar to a 2011 speech by Senate candidate Elizabeth Warren, condemning individualism.),” Reason‘s Emily Elkins writes.

“Obama’s claim is in stark contrast with what most of the public thinks. Since polls first began asking about this, upwards of 60 percent of Americans believe hard work matters more than lucky breaks, inheritance, or connections in determining success and wealth.”

But Obama’s attack on individualism goes even further.

“It is notable that Obama’s dismissal of the idea of hard work leading to success goes beyond Warren’s commentary, which made the less controversial point that successful business people make use of publicly funded infrastructure. The president on the other hand stated, “If you’ve got a business, you didn’t build that. Somebody else made that happen.” Presuming this was not a verbal flub (and Obama spokeswoman Lis Smith indicates it was not), Obama’s belief is a radical departure from popular notions about the relationship between individual initiative and success,” Elkins writes.
Obama’s view of individual success differs from the American view, but is perfectly in line with that of socialist countries.