If the Left want to round up people for 'incitement to violence,' start with Obama 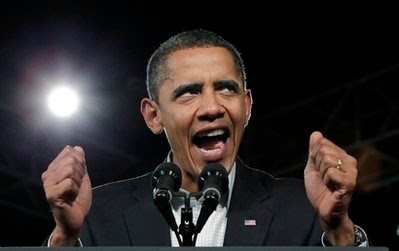 If members of the radical left, such as prominent Democrat activist Markos Moulitsas, are so concerned about political violence they're demanding their political opponents be rounded up and arrested for an act with no apparent connection to conservative speech, perhaps they just start by executing an arrest warrant at 1600 Pennsylvania Avenue.

"Federal authorities have arrested a Philadelphia man and charged him with threatening to kill House Minority Whip Eric Cantor (R-Va.) and his family. Norman Leboon will be charged with two federal counts: threatening to kill a member of Congress and interfering with his federal duties, and posting video online containing such threats. He is scheduled to appear in federal district court in Philadelphia on Monday afternoon." "Man arrested for Eric Cantor death threat," Politico, Mar. 29, 2010

Philadelphia? Who could possibly have said what there?

And then there's this.

"Kenneth Gladney, 38, a conservative activist from St. Louis, said he was attacked by some of those arrested as he handed out yellow flags with "Don't tread on me" printed on them. He spoke to the Post-Dispatch from the emergency room at St. John's Mercy Medical Center, where he said he was awaiting treatment for injuries to his knee, back, elbow, shoulder and face...The SEIU guy came up to him and said, "Why is an n-word like you handing out these flags?" "Kenneth didn't say anything to the guy. Before Kenneth could even say anything or act in any way shape or form, the SEIU representative punched him in the face. He went to the ground. Subsequently, two other SEIU representatives or members, however you want to say it, jumped on top of him, yelled racial epithets at him...kicked him, punched him." "Eye Witness to St. Louis Scuffle: 'SEIU Representative Punched Him In the Face," The Weekly Standard, Aug. 7, 2009.

What could possibly have incited SEIU to punch people at town halls? (Assuming you're one of those types believe people are mindless sheep who only act when commanded to.)

"(White House officials) showed video clips of the confrontational town halls that have dominated the media coverage, and told senators to do more prep work than usual for their public meetings by making sure their own supporters turn out, senators and aides said..."If you get hit, we will punch back twice as hard," (White House deputy chief of staff Jim) Messina said, according to an official who attended the meeting. "White House to Democrats: 'Punch back twice as hard'," Politico, Aug. 6, 2009

Yes, the violent attack occurred within 24 hours of reports the White House called on Democrats to "punch back."

If liberals think Sarah Palin should be silenced and even arrested because her PAC produced a map that used a crosshair graphic to depict districts they were spending money in, surely they'd agree Obama's vivid, violent call to Philadelphia activists is deserving of detention in Guantanamo Bay.

Or maybe they should just agree that insane, irrational people do insane, irrational things with no need to popular figures to command them, and that exploiting a horrible tragedy to issue demands the government silence your political opposition is in itself a troubling cry for help?

Email ThisBlogThis!Share to TwitterShare to FacebookShare to Pinterest
Funny how the media are immediately blaming Palin for this, but after the Fort Hood shooting in which the shooter cried "Allahu Akhbar" they frantically called for people not to draw any conclusions.
No comments: