"A Congressman Who's Nuts" 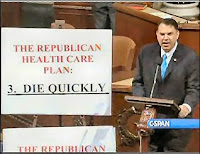 When asked in a radio interview if he had gotten any nasty phone calls over health care, insane Florida Congressman Alan Grayson claims a woman called his home and said "If you vote for health care, I'll kill you"...to his five year old son. No, really. He said A) he got a death threat...from a woman, B) the threat was the kind you come up with if you need a story, and C) since every liberal fantasy involves harm to children, his five-year-old son got the call.

He didn't save the message or call the police and somehow the media-loving, attention-starved Grayson never mentioned it until asked if he had a story about threats.

He then claims Republicans who say they were threatened are lying and only got the idea from Adolf Hitler. He's currently wanted on charges of violating Godwin's Law.

This is the same Democrat who claimed Republicans had a secret plan to kill off the poor, that he had poll numbers showing he would beat every Republican candidate in the *Republican primary* and demanded Attorney General Eric Holder arrest a Florida woman and imprison her for five years for creating an anti-Grayson website.

ObamaCare includes automatic tax on worker paychecks, of as much as over $2K a year

Why did Democrats hide the text of the ObamaCare bill until just before the vote?

Because they slipped in stuff like this, an automatic tax on your paycheck of as much as $240 a month to fund a new government insurance program.

No wonder Obama made sure most of the bill's provisions don't kick in until after he's out of office.

While Congress spent the last year debating how to provide health insurance for the uninsured, a little-known provision slipped into the heath care law that could cost some Americans upwards of $2,000 a year.

Under-reported and the under the radar of most lawmakers, the program will allow workers to have an average of roughly $150 or $240 a month, based on age and salary, automatically deducted from their paycheck to save for long-term care...

...Opponents say the provision is little more than a short-term revenue fix that will eventually add to the federal deficit.

"This is a scary proposition where the government passed a huge new entitlement program with gimmicks and tricks and the American people don't know they will be automatically enrolled in it by their employer if they don’t watch out," said Rep. Devin Nunes (R-CA).

Nunes says Republicans were blindsided by the provision because they were unable to see the final bill until the very end.