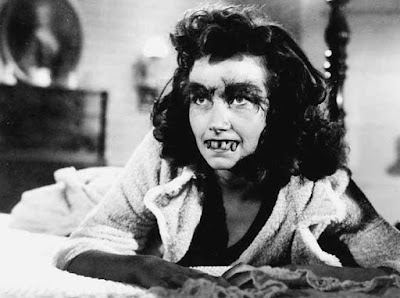 The infamous Dr. Frankenstein's grandson is living in Los Angeles where he and his bosses, and his deformed dwarf assistant, are developing a serum that stops the aging process. Oh, and unbeknownst to his boss, he's using experimental serums to turn his boss' pretty young niece into a ghoulish, disfigured killing machine that's wearing a lacy nightgown for some reason.

In need of a dead body to experiment on, crazy scientist takes the niece's friend on the worst date ever. Things don't go to plan and some dwarf-choking, acid-tossing and a raging fire later pretty niece and handsome colleague escape to live happily ever after. At least until the foundation finds out about all the dead dwarves and neck snapping and pulls the research grant.

I think I've seen this one before but I may be thinking of another film about an insane descendant of Dr. Frankenstein, of which there are several. I could be completely wrong about the plot as well, as it makes no sense.

What I Learned Today: Not to bother asking why the film is called "Frankenstein's Daughter" when it's really about "Frankenstein's Grandson's Boss' Niece and Some Girl She Happens to Know."
No comments:

The Beaumont (Texas) Independent School District is back in the news, this time after Regina-Howell Elementary handed out flyers to the children urging them to take part in the local Martin Luther King, Jr. Day parade, not just to push a political agenda of "peace, social justice and global interdependence," but to "counter the presence in the parade of militaristic organizations like the JROTC, ROTC, Police and Sheriff's Department."

Even stranger, the text of flyer was plagarized from a left-wing San Diego group that protested that city's 2006 MLK parade.