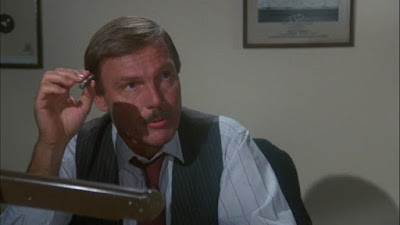 "Zombie Nightmare" stars Jon Mikl Thor as a baseball player cut down by hooligans, who seeks revenge on them in zombified form.

Strike two, it's a Canadian production of a mid-80s zombie film.

Strike three, it's a Canandian production of a mid-80s zombie film starring Adam West as an evil police detective.

The film opens with a flash back as a young Jamaican girl is accosted by street toughs as she leaves a lame baseball game. A guy who looks like a reserve John Candy steps in to save her, but is stabbed by thugs as his young son looks on.

Flash forward 30 years and the young son is a popular, well-adjusted baseball player. He stops the armed robbery of an offensive Italian stereotype, only to be run over by a speeding car driven by the kids who sat in the back of your high school history class.

The group of disrespectful teens, which includes a young Tia Carrere, is led by a Shawn Levy, who would later direct movies like "Cheaper by the Dozen," "The Pink Panther" and "Night at the Museum." In this film, however, he was trying too hard to be Corey Haim, yet still was a pretty cool movie punk.

Unable to cope with the loss of her husband, and now her son, the mother calls upon the now-grown girl to perform a voodoo zombification ceremony, so her son can seek his revenge. Zombie son seeks that revenge with a baseball-bat fueled vengeance,

The rash of young people's heads being snapped off attracts the attention of local police. Detective Batman leads the investigation, shooting down theories by his partner that they're not dealing with a typical, living, serial killer.

More teens are killed, until the detective tracks the killer to the local cemetery, where he, Zombie and Voodoo Lady are held at gunpoint by Batman. Batman fearlessly confronts the zombie, because under International Zombie Charter, zombies can only kill those who killed them. Batman shoots the zombie, killing him, and reveals to his partner he knows Voodoo Lady because HE was the street tough who 30 years ago tried to rape her and killed Zombie's dad.

Forgetting the zombie charter, long-dead zombie dad bursts from his grave and drags Batman into a hellish world of dry ice and stage lights.

The filmmakers compensated for the lack of good special effects, good makeup, good sets, or good acting through...not much. What you're left with is a silly, nonsensical movie that becomes even sillier and more nonsensical when you factor in the Canadian exchange rate. Along with being a bodybuilder, Jon Mikl Thor is also an accomplished heavy metal musician and composed much of the film's music.

The film's most redeeming qualities? Roger Corman is one of the producers, and they somehow tricked Motorhead into offering "Ace of Spades" as the theme song.

What I Learned Today: Canadian zombies can be stopped either through a shot to the head, or a game misconduct penalty.
No comments:

After months of whining Republicans were the "Party of No," Democrats are now the "Party of No F&^# Way!!!" in this insane, rambling, profane rant* by the same radical group that ran ads accusing American generals of being traitors to the United States for not leaving Iraq.

And if ObamaCare is really as wildly popular as they desperately insist it is, why are they doing everything they can to avoid a vote on protecting it?

* Go to any liberal message board. You'll find many can only communicate through a series of profanities, obscenities and references to rape, genitalia and fecal matter.
http://DonnyFerguson.blogspot.com
No comments:

President Barack Obama warned Beijing that its prosperity has been based on free trade and the stability provided by the presence of the US military in Asia even as he lauded China’s success.

Kudos to Obama for at least faking sincerity. He still opposes free trade, but the continued decline of the United States' economy under his control is proving even to him his statist ways are flawed. Obama's lip service to free trade does not mark a move away from his job-killing policies, but are intended to mollify employers, whose lobbyists can easily be bought off with platitudes and empty gestures.

Obama's changed tone doesn't reflect a change in substantive policy, but it does show he does react to negative stimuli. Continued political pain is prescribed to treat his malignant statism.