CHICAGO - Some U.S. states have begun using controversial new breast cancer screening guidelines to stop offering routine mammograms for uninsured women in their 40s, a survey by the Avon Foundation for Women released on Monday found.

The Avon survey of more than 150 breast cancer health educators and providers from 48 states and Washington, D.C. found a quarter of the states have either cut or eliminated screening mammography and other early detection services for women under 50.

The survey renewed concerns that the guidelines from the U.S. Preventive Services Task Force, which raised the recommended age for women to start getting screened for breast cancer to 50, might be used to deny health coverage for women...

...The programs, funded by both state and federal dollars, offer low-income, uninsured, and underserved women access to breast and cervical cancer screening and diagnostic services.

Democrats claim the mammogram bans are standard procedure in Canada and Europe.

But what they intentionally neglect to say is women there die from breast cancer at rates much higher than in the United States.

Because of early detection, only 20 percent of American women diagnosed with breast cancer die from the disease. But because of rationing like that now seen in America's government-run health care systems, the death rate in France and Germany is 33 percent and a whopping 50 percent in the United Kingdom and New Zealand.

Since socialized medicine cannot function without rationing and denying care to the elderly or those with chronic illnesses, patients are denied care and even advised to commit suicide (as Oregon's government-run system suggested to patients via a form letter) when government accountants find they are a net financial loss.

Under Obama's proposal, women would be refused cancer screenings until it is too late to save their lives because, as Margaret Thatcher put it, you eventually run out of other people's money. And under the Obama proposal there are no alternatives, as it is designed to eliminate all competing private health care alternatives.

Barack Obama told Americans he wouldn't enact the recommendation of a government health care board to deny cancer screening to women. He didn't need to. He knows the government bureaucrats that operate the current government-run systems, and would operate his European-style socialized system, will have no choice but to enact it themselves.

Government rationing of life-saving care is already common practice for many Americans, and Barack Obama wants to impose it on all women. His health care proposal is nothing more than a stimulus package for the funeral home industry.

Email ThisBlogThis!Share to TwitterShare to FacebookShare to Pinterest
If the women's hockey gold medal match comes down to Canada and the United States, I may have to support Canada.

The United States refuses to press the in the third period because they feel it's wrong to score too many more goals than the other team. The Canadian team, however, has no problem with the concept of individual exceptionalism and refuses to hide their talents to avoid offending the lesser-talented.

To the United States' program an 13-0 uneven distribution of goals is something to be ashamed of and suppressed because it isn't "fair." The Canadian womens' program sees a 13-0 lead as a testament to the hard work they have put in to being singularly exceptional and something to be celebrated by doing even better.

Is there anything more American than that?

The last Canadian veteran of World War I has died at the age of 109.

John Babcock enlisted at the age of 15 after lying about his age. He trained in Canada and England but the war ended before he reached the French frontline.

He died in Spokane, Washington, where he had lived since 1932, according to a statement from Mr Harper.

Mr Babcock tried to enlist in the US military again in 1941 but failed when it was discovered he had never become a US citizen.

There is still no official national monument to World War I veterans.

If you're in D.C., we do have a monument on the Mall to District residents who served I highly recommend you visit. It was dedicated on Armistice Day, 1931 and my hometown congressman, Ted Poe, has filed legislation to expand it and designate it as the official memorial.
No comments:

Big news from CPAC. Not only was the event dominated by libertarians, Ron Paul takes home a surprising win the the annual Republican presidential nominee preference straw poll. Paul' 31 percent was nearly 10 point ahead of Mitt Romney's 22 percent, breaking his three-year winning streak. Sarah Palin was a distant third with just eight percent.

More numbers.
* Anti-Paul factions claim the Campaign for Liberty spammed straw poll with students. Nothing could be further from the truth. 48 percent of those who voted this year were students, a dropoff from last year when 52 percent of those who cast ballots were students. 54 percent were less than 25 years old, a drop from last year when they made up 64 percent.
* With 2,395 registered attendees voting, it is easily the biggest "turnout" for a CPAC poll, crushing 2009's total of 1,757.
* 80 percent of CPAC attendees say their "most important goal is to promote individual freedom by reducing the size and scope of government and its intrusion into the lives of citizens." Only nine percent said government should protect "traditional values" and only seven percent said government's most important goal is security.
* 52 percent said "reducing the size of federal government" was their most- or second-most important issue followed by "reducing spending." The "war on terror" got just 18 percent, "illegal immigration" just five percent and "stopping gay marriage" just one percent.
No comments:

Fact: A reincarnated alien in a rhinestone jumpsuit is more credible than Obama's economic policies 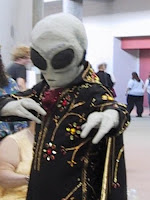 So, the average Cash for Clunkers transaction will reduce US gasoline consumption by 320 gallons per year.

More importantly, 5 million barrels of oil at $70 per barrel costs about $350 million dollars.

So, the government paid $3 billion of our tax dollars to save $350 million.

CBS, without the laugh track.

Ever wonder how funny a typical CBS "sitcom" is without using its heavily-abused laugh track as a crutch? Check out this clip with the laugh track removed, and see if you can tell where the jokes are.