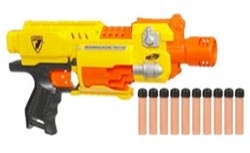 "The Barricade," Manjoo writes "is what a gun expert would call a 'semiautomatic...'"

It's also what a normal person would call a "toy."

"The Barricade is a pretty scary toy, and it’s not even close to being the scariest Nerf gun...Indeed, Nerf has become a lot more frightening since I was a kid," Mandoo types with quivering, sweaty fingers.

His hoplophobia (the irrational fear of guns, often rooted in psychosexual disorder) reaches a crescendo with "Over the past few weeks I’ve been playing with some of the new Nerf guns, and I’ve tied myself in knots thinking about whether ultrarealistic weapons are just harmless fun or whether they reveal something terribly wrong with modern American boyhood. I’ll admit it: As a father of a 1-year-old son, Nerf’s weaponry worries me."

He talks to a child psychiatrist, who assures him Nerf is not part of some massive military-industrial conspiracy to brainwash his children.  But Mandoo doesn't sound convinced.

Criminologist Don Kates, lecturer at Stanford University, Oxford University, Saint Louis University School of Law, and the University of Melbourne, has concluded a fear of weapons, as expressd by Mandoo, is sometimes a sign of retarded sexual and emotional maturity (Guns, Murders, and the Constitution, Pacific Research Institute, 1990)

"The Abortioneers" a blog describing itself as  "The ins and outs and ups and downs of direct service in the field of abortion care" asked its readers last week to submit "your factual, subversive, hilarious, sensitive, face-kicking, or just plain silly abortion haiku."

The author offers this:

Abortion clinics
Are great because they're awesome
They do abortions

One contestant offers this:

Unwanted baby
women trust themselves to know
abortion’s so right

"Abortion's so right?"  That one's almost gleeful about pocketing the abortion fee.

The winner?  This charming ditty.

Aborted my child
I should have kept my legs closed
I'm a worthless slut
No comments: Share this!