Citizens can go to FuelingJobs.com to sign the petition to Secretary of State Clinton supporting approval of 342,000-job energy pipeline

WASHINGTON – Americans fed up with high unemployment and rising gas prices can go to FuelingJobs.com to register their support for the Keystone XL pipeline project, a new safe, clean North American energy pipeline projected to create 342,000 jobs and deliver 700,000 barrels of oil a each day to United States refineries.

Citizens have until a government deadline of Oct. 5 to go to FuelingJobs.com and sign the petition to U.S. Secretary of State Hillary Clinton.

The Keystone project, which has met the highest environmental and safety standards, is being blocked by lobbyists for the multi-million dollar environmentalist lobby.

“Americans need to go to FuelingJobs.com and sign the petition to demand Barack Obama stop blocking this jobs project.  FuelingJobs.com is the only way grassroots Americans can stop the million-dollar lobbyists who are blocking 342,000 jobs and lower gas prices,” said ATP Executive Director Donald Ferguson.

“How heartless can environmentalists be?,” said Ferguson.   “The Keystone pipeline creates 342,000 new jobs and safely, cleanly delivers 700,000 barrels of oil each day to U.S. refineries.  Hollywood actresses and million-dollar ‘green’ lobbyists may be doing great in this economy, but millions of Americans need the jobs and affordable gas this national project creates.  The pipeline is the safest, cleanest form of energy transport there is, and it has easily passed the required environmental statement,” said Ferguson.

Among the activists opposing the jobs pipeline is actress Daryl Hannah, three-time Razzie Award nominee for Worst Supporting Actress and star of such films as the 1999 remake “My Favorite Martian” and the TV movie “Shark Swarm.”

“If Daryl Hannah is promoting something it can’t be good.  I saw ‘Addams Family Reunion.’  I want my money back,” said Ferguson.

Obama changes law so his donors, CA Dems get Solyndra $ before taxpayers

President Barack Obama raised eyebrows when he exempted the now-bankrupt and FBI-raided Solyndra solar experiment from a federal law requiring taxpayers be placed ahead of private creditors when a federally-funded corporation goes bankrupt.

Now we may be finding out why.

"Out of the hundreds of out-of-work employees, vendors, investors and other creditors in the bankruptcy of government-backed solar-panel maker Solyndra LLC, one name stands out: the California Democratic Party...One investor, Argonaut Private Equity, is tied to George Kaiser, Oklahoma billionaire and fundraiser for Mr. Obama’s 2008 campaign," The Washington Times reports this morning.

Solyndra will not reveal how much cash the California Democrat Party may be receiving.  The Party claims to know nothing about the deal.

Solyndra received over a half-billion dollars of taxpayer money from the Obama administration after the Bush administration refused to give the cash.

"Just two years ago, the company received federal loan guarantees of more than $500 million, money it burned through but hasn’t repaid. Because of a subsequent loan restructuring, taxpayers won’t be repaid before the private investors who poured $75 million into the company earlier this year as it tried to stay afloat," the Times reports.

Obama made Solyndra the centerpiece of his failed "green jobs" political campaign, and the partnership may have paid off handsomely. “This announcement today is part of the unprecedented investment this administration is making in renewable energy and exactly what the Recovery Act is all about," the Obama administration announced when making the handout.

"Solyndra employees have donated more than $20,000 to federal lawmakers over the years, most of it going to Democrats. A breakdown of donations by the Center for Responsive Politics shows 72 percent went to Democrats, 27 percent to Republicans and 1 percent to Libertarian candidates," the Times reports.

When questioned how the Obama-connected firm managed to get a half-billion dollars in taxpayer money the company's predicted bankruptcy prevented it from getting most private loans, Solyndra executives exercised their right to avoid implicating themselves in a crime.

"In the wake of the company’s collapse and subsequent raid by the FBI this month, Solyndra’s top two executives, citing their Fifth Amendment rights [against implicating themselves in a criminal matter,] refused to testify last week before the House Energy and Commerce investigations subcommittee, which has been looking at the Solyndra loan deal for months," the Times reports. 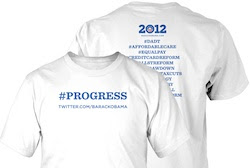 OccupyWallStreeters should try occupying a classroom 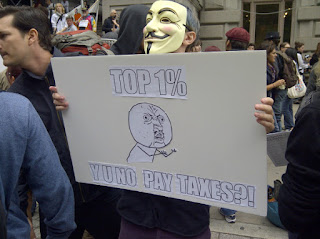 1) The top one percent pay 27.6 percent of total federal taxes.

2) Guy Fawkes was trying to assassinate the Protestant king and replace him with a Catholic monarch.  Not exactly an anarchist icon.

“(Terrorism is) the unlawful use of force or violence against persons or property to intimidate or coerce a government, the civilian population, or any segment thereof, in furtherance of political or social objectives.”  - Federal Bureau of Investigation


After overwhelming Longview's security guards, the longshoremen allegedly dumped grain, broke the windows of the guard shack and severed the brake lines of several railroad cars. Police were called in and 19 arrests were made...

... these brave ILWU members have breathed life into the labor movement. One can only hope that their actions will inspire union members in other industries to assert themselves as well...

...The Longview uprising is self-determination personified. It's American, it's patriotic, it's grassroots...

65% of voters support the REINS Act

I’ve been telling you for months about our REINS Act, which has been introduced in the House and Senate.

As you recall, the REINS Act requires any proposed federal regulation costing more than $100 million to be voted on by Congress and signed by the President before it can take effect.

The prospect of further restoring Congress as the only constitutionally-authorized lawmaking body, and making regulations transparent and accountable, has whipped Gang Green into a frothing rage.

That means you and I must get active, because Barack Obama is going to pull every stunt and twist every arm to prevent a vote in the House.

You see, a new poll released this morning by the internationally reputable Tarrance Group finds overwhelming majorities of voters agree with you and me about the need for our REINS Act and 65 percent support the REINS Act.

Not many bills can boast they have the support of 65 percent of voters.

> Three quarters (74%) of voters throughout the country believe that businesses and consumers are over-regulated.”

> More than two thirds (70%) believe increasing the number of regulations on American businesses will result in more jobs moving overseas.”

> One of the highest points of agreement in the survey is fact that 73% concur that “every time the federal government mandates a new regulation on America’s large and small business, the prices of American made good and services like gasoline and food go up.”

> Voters do not want a regulatory process that takes away legislative duties reserved for Congress…This strong support for Congressional involvement is consistent across partisan groups, including among Democrats (67%), Republicans (65%) and Independents (64%).”

> (T)here is a strong desire for checks and balances in creating regulations, as two thirds (65%) favor requiring regulations be approved by Congress and the President before they are enforced.

But that just means Gang Green will fight even harder to stop us.

I need you to go here and chip in $10 to help us mount our fight to get a recorded vote on the REINS Act.

Any gift in any amount will be appreciated and put to wise use.

Speaker Boehner says he will begin the process this month.

You and I must be ready to fight.

I hope I have your support as well.
No comments: