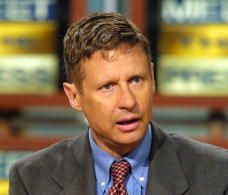 The Libertarian Party nominated former New Mexico Governor Gary Johnson for President of the United States, expressing confidence he will be able to find effective small-government solutions to the country’s most pressing problems and mount a strong challenge to his major party rivals.

Mr. Johnson was declared the party’s Presidential nominee after he won 70% percent of the vote in the first round of balloting, receiving 419 of the 595 votes cast.

In his acceptance speech, Mr. Johnson promised to present a clear and viable alternative to major party candidates, saying his victory in November will offer Americans effective solutions to slow economic growth, high unemployment and endless foreign military commitments that sap the country’s financial strengths. America, for the first time in modern history, is poised to reject the tired two-party duopoly that has brought the nation to its knees economically.

“I am honored and I just want to pledge that no one will be disappointed. We’re going to grow the Libertarian Party.” said Mr. Johnson.

A successful businessman who lives in Taos, NM. Mr. Johnson is known as an unwavering crusader for fiscal responsibility, free enterprise and individual freedoms. During his gubernatorial tenure, he used his veto pen more than 750 times to forestall attempts to grow government and put an end to wasteful government projects. He cut taxes 14 while maintaining New Mexico as one of only four states in the country with a balanced budget. The state boasted a $1 billion budget surplus when Mr. Johnson left office in 2003.

The nominee’s biography can be found at garyjohnson2012.com/about

“I am convinced that Gary Johnson will be an exceptional candidate, and a very successful President,” said Mark Hinkle, Libertarian Party Chair. “We have an impressive roster of talent this year to challenge our Big Government opponents not only in the race for the White House, but also in state and local races. The major parties offer Americans only one solution: Bigger government. Libertarians will show voters how we can make government small while dramatically increasing jobs, lowering taxes, and scaling back government debt.”

Yesterday the convention approved a new party platform, which leaves unchanged the fundamental tenants of the Libertarian Party: Individuals should be free to make choices for themselves and to accept responsibility for the consequences of the choices they make. Changes adopted by party delegates were generally ones that improve the wording or clarity of the party’s intent to advance liberty and shrink Big Government. One significant change adopted was to add ballot initiatives to the party’s mission.
No comments: