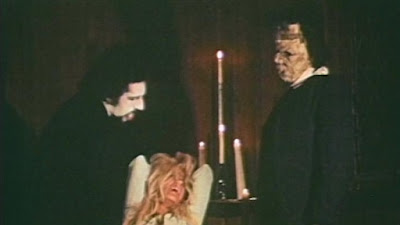 Sticking with the "evil descendant of Dr. Frankenstein" theme, "Dracula vs. Frankenstein" isn't just one of Lon Chaney's last films, it's a literal Frankenstein's movie -- made up of parts of older, dead films.

Long story short, cute hippie girls are disappearing in California. The culprits? An evil relative of Dr. Frankenstein and his mute assistant, played by Chaney.

Dracula shows up and point them to the dead-again corpse of the original Frankstein's creation, which is buried in California for some reason. One can only guess the zombie retired to Encino to sell jewelry. He is reanimated and shenanigans ensue.

I can't find a coherent recap of the film anywhere, much less one that explains how it ends. That can mean only one thing. This is going to hurt.

Fun Facts:
Many of the props used in the film were used in the classic 1931 Frankstein film.

The original plot called for Frankenstein's zombie to be turned into a vampire by Dracula, but the fangs kept falling out of the actor's mouth.

While the story takes place over just a few days, several of the actors age dramatically in the film because much of the film was made up of footage shot years earlier for a different film about bikers. That's why some scenes have biker characters that appear and disappear for no explained reason.

This was one of at least three Dracula-meets-Frankenstein films produced in the late 1960s/early 1970s.

What I Learned Today: "Kidnap by descendants of Frankenstein and their disfigured lab assistants" was a common threat faced by America's young women between 1958 and 1970.
No comments: Share this!

The NHS is gambling with patients' health by increasingly banning operations for hernias, cataracts and arthritic joints to save money, one of the UK's most senior medical figures said...

...The NHS in England needs to save £20bn by 2014-15 as part of an efficiency drive. Black said increasing numbers of trusts are postponing or axing provision of dozens of elective surgical procedures, including those for gallstones and tonsil and adenoid problems.

Think that doesn't affect you? Remember, this deadly rationing is precisely what Obama admitted is part of his health care acheme.