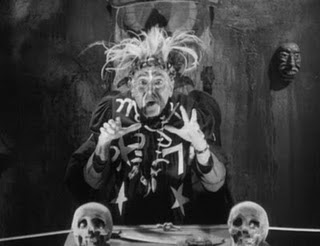 What appears to be rural gas station is really a trap for lone young women driving the back woods. Kidnapped by the gas station manager, they end up in a dungeon beneath Bela Lugosi's mansion.

Lugosi uses voodoo and black magic to steal their life essence so he can bring his wife back from the dead. He's assisted by John Carradine, who rather than play his usual role of a highly intelligent doctor or scientist, plays Lugosi's dazed, dimwitted, creepy assistant.

The movie is pretty silly, but it has the always-awesome Carradine, and Lugosi turns in a good performance. But, the movie is still pretty silly. At one point the gas station owner supposedly chants "Bomboona Never Fails" while Lugosi and Carradine voodoofy some girl.

The police are apparently too dimwitted to bother checking out the gas station where all these girls keep disappearing, but the whole voodoo life stealing operation falls apart when a reporter happens to break down at the station and stumbles upon Bela's love dungeon.

What I Learned Today: Avoid gas stations that offer regular, unleaded and chloroform.
No comments: Share this!