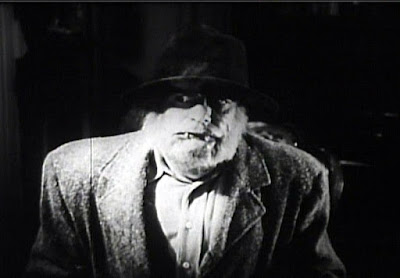 If any movie obeys Bad Monster Movie Law to the letter, it's "Mad Monster."

Dr. Lorenzo Cameron's colleagues consider him crazy, so he decides to prove them wrong -- by turning his gardener into a werewolf that kills them. Monster Movie Law is obeyed as 1) an unwilling assistant in turned into the monster, and 2) through the use of a "serum."

In compliance with Bad Monster Movie Law, the villain develops the monster to 3) exact revenge against colleagues who consider him crazy.

At some point in the film Cameron has an imaginary conversation with his colleagues where he tells them he developed a serum that turns America's soldiers into wolfmen so they can fight the Communist menace. The imaginary versions of his colleagues laugh at him, so logically he decides to instead use the serum to kill his real-life colleagues.

Finally, in compliance with Bad Monster Movie Law, the case is cracked by 4) a reporter the female lead has fallen in love with, and 5) the mad scientist and monster die in a laboratory fire.

From what I've seen on film, in the 1940s and 50s laboratory fires killed more people than heart disease and cancer combined.

What I Learned Today: When applying for a job as a low-level employee of a scientist who lives in a rural mansion always ask A) for a no-injection-of-serums clause, and B) where the fire extinguisher is.
No comments: Share this!

Rapist/killer on the ANC? We owe Marion Barry an apology.

Think D.C. residents are silly for having a mayor who smoked crack?

Try having a Advisory Neighborhood Commission Chairman who could only attend meetings after getting a pass from the mental institution where he has been locked up since 1967 after he savagely raped and killed a Senate aide.

So I'm reading a story in this morning's Washington Post about a woman doing a documentary on the people confined to the city's mental hospital for the criminally insane. I was stunned by this sentence.

"[Lewis] Ecker, for instance, [institutionalized since 1967 after he raped and killed a Senate aide] was an elected neighborhood advisory commissioner in the 1990s in Ward 8, where St. Elizabeths is."

Yes, D.C. residents elected to the ANC a man who was confined to a mental institution for three decades after he brutally raped, sodomized and strangled a 24-year-old girl, leaving numerous bite marks on her body.

But that's all the article said. So I looked into it further.

Not only was he elected to the ANC, the ANC elected him chairman even though the hospital isn't sure whether he'll rape and kill again. Despite that, hospital officials let him out to attend ANC meetings.

Ecker lost his community privileges after "hospital officials found more than 20 sexually sadistic stories in his ANC office on the hospital grounds. He eventually admitted that he wrote the stories, casting himself as the protagonist who dominated and humiliated women. One of the female characters has the same first name as the prosecutor who is opposing Ecker's bid for more freedom."

And it's not like he was a model prisoner. According to the earlier Post article there have been "at least four occasions since the late 1970s when Ecker has been caught with sexually sadistic materials, ranging from the short stories to a card catalogue of women -- including his murder victim -- with sexual comments about them.

"He also has been caught with hospital keys, pictures of himself dressed in a hospital guard's uniform, as well as snapshots of him and his girlfriend and some patients in sexually provocative poses. And he has disappeared at least twice, once on a hospital field trip to the zoo, and another time for several hours when he was in an apartment with his former wife.

"Each time, (prosecutor Colleen) Kennedy said, Ecker initially denied wrongdoing, then changed his story several times before finally admitting culpability -- examples of what she says is his manipulative personality."

Who's stupider? Hospital officials for letting him out to run for office and attend ANC meetings? ANC members for naming him chairman? Or Ward 8 residents for electing him?
No comments: Share this!

The Unnatural Nature of Conservationists

From this morning's Virginia Beach Virginian-Pilot:

A juvenile harbor seal was stranded Dec. 28, 2010, south of Little Island Fishing Pier in Sandbridge...The small seal was found with shark bites on the left side of its body. The next day, Puddy was taken to the aquarium's Marine Animal Care Center, where staff administered fluids, antibiotics, topical treatment for his wounds and nutritional support.

He was released back into the water yesterday amid much cheering, media coverage for the humans and photo opportunities.

I don't get supposed animal/nature advocates. Without treatment, the wounded seal likely would have been eaten by sharks. By interjecting themselves into nature, throwing the seal into an artificial human environment and treating it, they deprived sharks of needed food.

Between harbor seals and sharks, guess which one is in more need of saving. Many sharks species are near extinction because folks like these "rescuers" make them out to be threats.

One example is the dusky shark, which lives in the waters off Virginia Beach. Because of their slow reproduction rate they are nearing endangered status. Taking away potential food sources does more the limit biodiversity than help it.

These people don't care about nature. They just care about the few species that are cute enough to make them feel good about themselves, at the expense of nature itself.
No comments: Share this!