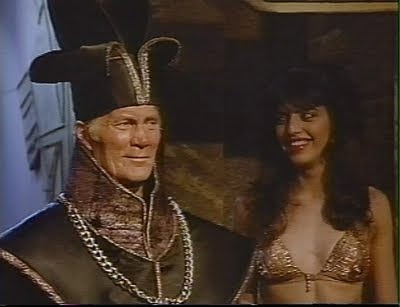 Some guy with an Italian name (I can't spell it. Just take a few consonants, a lot of vowels, put in a blender and pour it on paper) stars as Professor Tarl Cabot, a mild-mannered man who is actually the heroic protector of a planet called Gor.

The film opens as this second-string Fabio and his weaselly friend Watney spend a night out hitting on hopelessly '80s women, and hop into his hopelessly '80s sports car. Through the power of bad special effects they are transported to Gor, where the residents have called upon him to protect them from their evil Queen and the evil high priest Xeno, played by a bored Jack Palance.

The Queen plans to kill the King and take the throne for herself and enlists the help of Jack, who is dressed like a leather Bootsy Collins. With weasel friend and his newly-reunited Gor girlfriend, Italian dude sets out to on an adventure that promises bad stage fighting and copious plot holes.

After about 90 minutes of needless cleavage and thonged Europeans hitting each other with prop swords, the Queen is defeated, Jack leaves the set with his paycheck and the audience leaves to demand their money back.

As bad as the movie is, from what I hear it's not nearly as disturbing as the creepy books it's based on.

Wait For It...: Cabot's name is said 55 times in just the first 10 minutes of the movie, mostly in an excrutiating scene in which Watney whines the name over and over again as they wander through the desert. It's so bad the Pentagon has actually weaponized the dialogue and dropped it on hostile nations.

What I Learned Today: Now I know what the Pope would look like if the Church were sponsored by Tandy Leather.