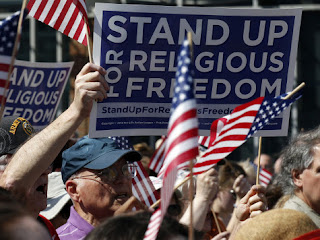 A key, and controversial, component of ObamaCare could soon be ruled upon by the Supreme Court.
The United States Supreme Court this morning ordered the U.S. Fourth Circuit Court of Appeals to hear a lawsuit brought by Liberty University challenging the constitutionality of ObamaCare's mandate forcing employers to finance their employees' birth control.

Liberty claims that mandate violates their constitutionally-guaranteeed right of free exercise of religion by forcing them to finance activities that conflict with their faith.  I agree.

When the Supreme Court last year ruled (incorrectly I believe) that ObamaCare's requirement all Americans buy health insurance or face a fine was constitutional under Congress' power to levy taxes, the court did not rule on whether the "contraception mandate" violated First Amendment protections of religious exercise.

Liberty's original case was dismissed by the Supreme Court when the Court ruled ObamaCare's insurance mandate was constitutional.  Liberty appealed to the Court to hear the case, citing the fact the employer and contraception mandates had not been ruled upon.  The Court agreed and this morning order the Fourth Circuit, based in Richmond, to hear the case.

The Fourth Circuit could hear the case next spring.  It has a reputation for ruling quickly, issuing a ruling in appeals cases in an average of just seven months.