Killing the Klan with Kindness 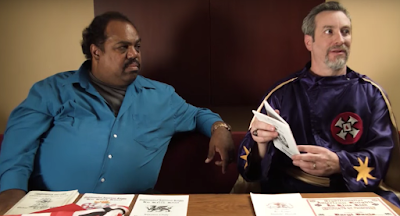 As part of my ongoing project to introduce Jesus's ethic of nonviolence to the public, I've launched my new A Neighbor's Choice media platform and, with it, a very enjoyable radio discussion I had with Daryl Davis, star of the new documentary Accidental Courtesy. The film is available in select theaters. It will debut on Itunes on Feb. 21.


A vaunted African American blues musician who has played with some of the all-time greats, Daryl Davis uses his love of music and Americana to reach out and befriend leaders of the KKK. "How can you hate me if you don't even know me?" he asks them.

My interview with Daryl Davis showcases the difference between Jesus's personhood ethic and collectivism. In it, Davis recounts a lifetime of courage and daring encounters leaders of the Klan. Instead of writing them off due to their nasty ideology, he patiently gets to know them. Many of the Klansmen end up bonding with Daryl and, as a result, renouncing their membership in the KKK.
Daryl Davis's insistence on seeing ideologues as persons pierced through the deep-seated veil of collectivism and brought human compassion to his enemies. Some leaders of leftist groups like the NAACP and Black Lives Matter have attacked him for the same reason the Pharisees attacked Jesus: they are focused on winning and beating the enemy group. Daryl wasn't.

Ironically, his face-to-face fellowship approach over collective fear and anger caused real transformation and renunciation of violence. He models a beautiful path towards racial healing and respect for individual persons. Please enjoy my interview with Daryl Davis.

David Gornoski is your neighbor – as well as an entrepreneur, speaker and writer. He recently launched a project called A Neighbor’s Choice, which seeks to introduce Jesus’ culture of nonviolence to both Christians and the broader public.