It does, however, follow the party of the congressman who is up for election in November.

It's starting to look like Obama's "stimulus" program is nothing more than another plan to purchase a Democrat-controlled Congress using funds borrowed from future taxpayers, much like the bailout of the United Auto Workers, the Cornhusker Kickback of Sen. Ben Nelson and the Louisiana Purchase of Sen. Mary Landrieu.

Rather than provide jobs for Americans who need them, Obama appears to be in the business of buying jobs for Democrat politicians who don't deserve them. 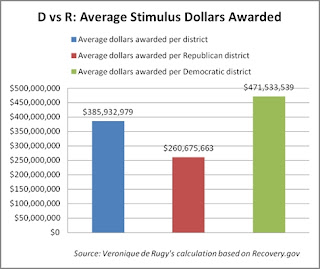