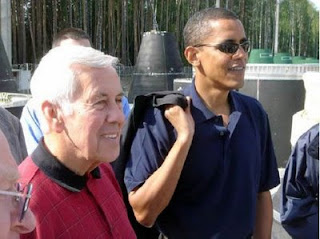 Sen. Dick Lugar (R-Ind.,) who voted for cap and tax proposals in 2003 and 2005 and demands employers emit less carbon dioxide, was defeated by a 60% to 40% margin by State Treasurer Richard Mourdock.

“Lugar is among a dwindling number of GOP lawmakers who has spoken about the need to curb greenhouse gas emissions. Mourdock, in contrast, has slammed what he calls ‘junk science associated with global climate change alarmism,’” The Hill reports.
“On climate legislation, Lugar was among the minority of Republicans that voted for failed cap-and-trade proposals in 2003 and 2005 sponsored by Sens. John McCain (R-Ariz.) and Joe Lieberman (I-Conn.)”

Which Cap and Taxing Republicans will be next?