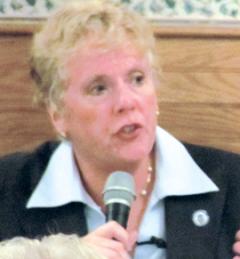 Claiming to be an Indian to steal a job is now the second-craziest story a Massachusetts Democrats has made up.

"Denise Andrews, a Democrat representing the the 2nd Franklin district, went to the police accusing her Republican opponent of buying cocaine," the Daily Mail reports.

Confronted on her claim by police, Andrews even falsely accused police officers of covering up the drug sale in her attempt to have her opponent falsely imprisoned.

"According to a police report, Andrews turned up at the station on August 14 and said someone within the Police Department had phoned a constituent and told them that police had received a telephone call from a cocaine dealer who claimed to have sold drugs to Lee."

"Andrews then told Timothy Anderson, the chief of police in her rival’s hometown of Athol, that one of his officers had gone to Lee’s home, confiscated the cocaine and brought it back to the station.  Originally, Andrews could not remember the name of the officer who went to Lee’s home.

"She then returned to the station and named the narcotics officer, Jarret Mousseau, as the person who confiscated the drugs.  However, Mousseau was not on duty the day she was alleged to have gone to Lee’s home and there was no cocaine in the police station’s drug locker that day either. Mousseau denied any knowledge of a drug sale."

Her accused opponent, Susannah Whipps Lee, even took a drug test.  Obviously, it came back negative.

Andrews refused to apologize for her attempt to have her opponent falsely arrested, which coincidentally enough is itself a crime.

Filing a false police report in Massachusetts is punishable by a $500.00 fine and a year in prison.