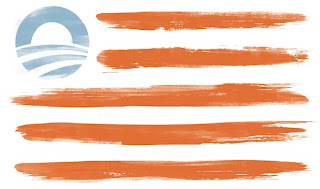 The official Barack Obama campaign is selling a new American flag print, with the Obama campaign logo replacing the field of stars representing the United States.

Designed by artists Ross Bruggink and Dan Olson, the Obama campaign calls it "Our Stripes."

It took two people to design that?

Give Hugo Chavez some credit.  When he redesigned the Venezuelan flag to represent his socialist views, even he wasn't narcissistic enough to put himself on it.