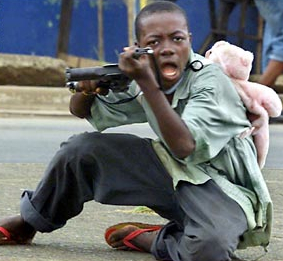 "(F)or the third year in a row, Obama has waived almost all U.S. sanctions that would punish certain countries that use child soldiers, upsetting many in the human rights community," Foreign Policy magazine reports.

"Late Friday afternoon, Obama issued a presidential memorandum waiving penalties under the Child Soldiers Protection Act of 2008 for Libya, South Sudan, and Yemen, penalties that Congress put in place to prevent U.S. arms sales to countries determined by the State Department to be the worst abusers of child soldiers in their militaries. The president also partially waived sanctions against the Democratic Republic of the Congo to allow some military training and arms sales to that country."

"After such a strong statement against the exploitation of children, it seems bizarre that Obama would give a pass to countries using children in their armed forces and using U.S. tax money to do that," Jesse Eaves, the senior policy advisor for child protection at World Vision, tells FP.

Obama's decision to arm child kidnappers undermines the work of the international community, which has been working to disarm and arrest warlords who kidnap and force children to fight to the death -- using weapons supplied by Barack Obama.