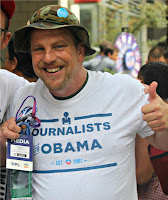 “During this final week, from October 29 to November 5, positive stories about Obama (29%) outnumbered negative ones (19%) by 10 points,” Pew reports. “Only during the week of his nominating convention was the treatment in the press more favorable.”

The mainstream media did not extend that courtesy to Romney.  “For Mitt Romney in the final week, the tone of coverage remained largely unchanged from the previous two weeks. Negative stories in the press outnumbered positive ones 33% to 16%,” Pew reports.

Not only did the mainstream media focus its Romney stories on the negative, they focused their attention on burying voters in positive stories on Obama at a level nearly unseen in previous elections.

“After receiving roughly identical levels of coverage for most of October, in the last week of campaigning Obama was a significant presence in eight out of 10 campaign stories compared with six in 10 for Romney – one of the biggest disparities in any week after Labor Day,” Pew finds.