We have just a few hours left.

When the UN Programme Against Small Arms closes their meeting in New York City this evening, we could be facing a whole new flood of anti-gun restrictions.

Crack downs on semi-autos and ammunition sales will likely be included. Nationwide registration schemes and other avenues leading to full-on confiscation and destruction are also on the table.

President Obama and Secretary of State Hillary Clinton are standing by, ready to begin implementing these “suggestions.”

The ONLY way to stop them is to make one thing ABSOLUTELY CLEAR:

Americans will NOT tolerate any part of the UN Gun Ban.

NAGR has just completed a video update on the UN Programme Against Small Arms.

Please click here to watch this important video. Then make sure you sign the Pledge to Oppose Hillary’s Global Gun Grab. 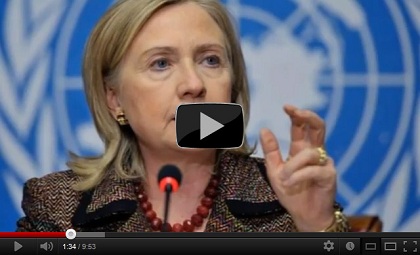 We must be ready to fight when the tyrants at the UN unveil their new plan to force third-world gun control on the US. We may have just days to respond once they unveil the Programme.

After you watch the video, be sure to Pledge Opposition to Hillary's Global Gun Grab .

Following the Programme, they claim to that they’ve destroyed “50,000 tons of conventional munitions,” which is doubtless driving up ammunition prices for US citizens.

Now they’re pushing for crack downs on semi-auto and ammo purchases. Full-scale registration and confiscation has been their goal all along, and they’re going to push ahead just as fast as they think they can.

The United Nations' Programme Against Small Arms meeting is in full swing in New York City.

And my sources inside the UN report countries such as Mexico continue pushing for a UN Gun Ban by the close of this year.

Both the "Small Arms Treaty" and the Programme Against Small Arms provide endless ways to accomplish this goal.

As you may remember, heading into the "Small Arms Treaty" Conference last month, anti-gun international bureaucrats were bragging that the conference would craft "the most important initiative ever regarding arms regulation . . ."

But thanks to your sustained grassroots pressure, no treaty was passed, likely because the Obama Administration could not get all the gun controls it wanted.

However, the gun-grabbers are back at it again this week and next, working to put together yet another anti-gun agreement -- and this time, such an agreement WOULD NOT require a vote in the U.S. Senate.

You and I know what these international anti-gunners really want . . .

And, as a reminder, to make matters worse, Hillary Clinton has already given this anti-gun nightmare the Obama administration's full blessing.

They're working to make it a reality in America.

But I have an answer to Hillary Clinton's schemes.

I need you and tens of thousands of other pro-gun Americans to Pledge Opposition to Hillary's Global Agenda by the end of their meeting, September 7th.

You see, with the November elections rapidly approaching, the gun-grabbers believe they're watching the perfect storm develop . . .

First, President Obama knows without every portion of his left-wing base energized and mobilized in November, there's no way he can win.

He simply must pay back his anti-gun pals to have any hope.

Secondly, as we've seen with his grandstanding after Seal Team Six's killing of Osama Bin Laden and the recent national security leaks coming out of the White House, President Obama has proven he'll stoop to virtually any level to appear "tough on terrorism."

Well, from day one, fighting terrorism has been the number-one excuse behind the "Small Arms Treaty."

In fact, the United Nations Office of Disarmament Affairs states, "Insurgents, armed gang members, pirates, terrorists - they can all multiply their force through the use of unlawfully acquired firepower."

These bureaucrats see your gun rights as a "loophole."

The solution?  According to the United Nations, government bureaucrats need to crack down on the Second Amendment, and everything will be fine.

Third, with the recent tragedy in Colorado, anti-gun Mayor Michael Bloomberg has already taken to the airwaves demanding President Obama publicly exploit the shooting in favor of gun control.

And with a sinking economy and lackluster campaign, President Obama is looking for any advantage he can muster.

Make no mistake -- this is a dangerous time right now for our gun rights.

That's why I need you to Pledge Opposition to Hillary's Global Agenda.

And as we've seen time and again, gun registration is always a major step toward full-scale gun CONFISCATION.

Worse, Hillary is calling for "consensus" to "avoid loopholes."  In other words, she's demanding that the UN seek input from third world dictators on how to best shut down YOUR Second Amendment rights, and the UN is only too willing to oblige.

Once the finishing touches are put on the United Nations Programme Against Small Arms on September 7th, I'm afraid the UN's Gun Ban could also include provisions that would force the United States to:
*** Enact tougher licensing requirements, making law-abiding Americans cut through even more bureaucratic red tape just to own a firearm legally;
*** Confiscate and destroy "unauthorized" civilian firearms (all firearms owned by governments are excluded, of course);
*** Ban the trade, sale and private ownership of ALL semi-automatic weapons including shotguns and other firearms commonly used for hunting;
That's why there's no time to waste.  After the United Nations' meetings, I'm afraid you and I will not have much time to react.

In fact, we will only have a few weeks to kill the UN Gun Ban once the anti-gunners make their move on September 7th -- all while the White House and the national media continue falling all over themselves to sell the United Nation's Gun Ban as an anti-terrorism measure.

That's why we must sound the alarm NOW.

So please Pledge Opposition to Hillary's Global Agenda right away!

“Suggestions” from the Programme can be rapidly implemented by the Obama Administration via executive order, Department programs, “internal” policies and in countless other ways.

The number of options Hillary and her global gun-ban cronies have at their disposal makes my blood run cold.

And now in the wake of the recent shootings, the anti-gun crowd is screaming for a new “assault weapons” ban, along with bans on conventional ammo and standard capacity magazines.

That's why, with this fight heating up and time running out, I'm counting on you to act IMMEDIATELY.

So won't you please Pledge Opposition to Hillary's Global Agenda right away?

Pro-gun champion Senator Rand Paul will use your pledge and the 1.4 million signed surveys we have gathered to prove that America opposes the UN Gun Ban.

If a UN Gun Ban gets to the floor of the U.S. Senate before the year is out, it is going to take more than just the signed pledges of NAGR members alone.

Contributions from members like you will help pay for a massive, nationwide mail, phone and internet program to turn up the pressure on the handful of Senators whose votes WILL decide passage or failure of the U.N.'s Gun Ban.

And if funds allow, in the days before the final vote, I'll launch hard-hitting newspaper, radio and TV ads calling on targeted U.S. Senators by name to vote to DEFEAT the Treaty.

Of course, you and I both know the gun-grabbers will spend MILLIONS to win this fight.

That's why I'm determined to raise at least $250,000 before the UN Programme Against Small Arms meeting adjourns on September 7th.

That way, your National Association for Gun Rights can spring into action IMMEDIATELY.

And with his reelection riding on support from his anti-gun buddies, you and I both know President Obama will do everything he can to renew efforts to push the UN Gun Ban before the November elections.

The truth is, unless we can succeed in turning up the heat on the U.S. Senate now, there could be no stopping this gun control freight train once it gets to D.C.

Unless you and I want to see our Second Amendment rights DESTROYED, we must fight back now.

So please Pledge Opposition to Hillary's Global Agenda -- and rush me your most generous contribution of $75, $50 or $100 TODAY.

The number-one item on the gun-grabbers' agenda is enacting GLOBAL gun registration -- setting the stage for international firearm confiscation.

So won't you please Pledge Opposition to Hillary's Global Agenda right away!

And in addition to your signed Pledge, will you help me reach my goal of raising $250,000 before September 7th the day the meeting ends?

With your contribution, I can spring into action IMMEDIATELY and launch the plan we've been developing for years.