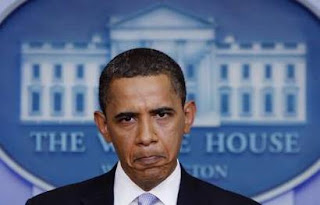 Voters are more likely to support putting a loaded gun in every school than support a ban on the sale of semi-automatic guns, a new Gallup poll finds.
Sixty-four percent of the country say "having at least one school official at every school carry a gun" will prevent mass shootings.  Sixty-three percent believe the same of "banning the sale of assault and semi-automatic guns."

That means Barack Obama is about to lead his party into a disastrous 2014 defeat.

That's because that 63 percent support for a semi-automatic gun ban collapses when voters learn just what exactly a semi-auto gun ban is -- and you'd better believe they'll be told on TV, radio and in the mail during the 2014 election.

Gallup finds support for a semi-auto handgun ban falls sharply to 52 percent when people are told a semi-automatic handgun is one "which automatically re-load(s) every time the trigger is pulled."  Putting one simple fact in front of a voter suddenly removes any mandate for a semi-auto ban.

Additionally, only 52 percent support for an issue at its most emotional time is a recipe for defeat for any politician who signs on, especially given the fact the poll is of all adults and not just active voters -- who are more pro-gun than the general public.

It gets worse for gun grabbers.  Gallup finds only 27 percent of Americans support a "a nationwide ban on the sale of handguns, except to law enforcement officers," which is what a ban on the sale of semi-automatic handguns practically is.  An astonishing 71 percent of the general public opposes such a handgun ban.

Backing that up is a CBS News poll conducted in the height of emotion after the incident.  It found only 26 percent believed stricter gun laws would helped prevent the tragedy.  Further smacking down Obama, half said stricter laws would have had no effect.