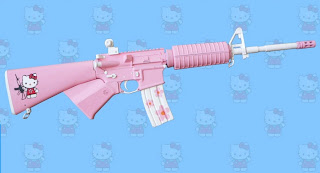 The Washington Times‘ Emily Miller exposes the “assault rifle” myth for what it is, a shameless lie intended to terrorize people out of supporting their constitutional rights.


Though it is one of the most popular rifles sold to civilians, the AR-15 is rarely used in crimes, presumably because it’s not readily concealed. The most recent FBI figures show just 358 of the 8,775 murders by firearm in 2010 involved rifles of any type. By comparison, 745 people were beaten to death with only hands that year, but no one has called for outlawing fists.

Mrs. Feinstein joins notorious gun-grabbers like New York City Mayor Michael R. Bloomberg in seeking to vilify guns based on their appearance, not their performance. The AR-15 series was designed to look like the military’s M-16, but it is semi-automatic. That means it fires only one round when the trigger is pulled, and that round is no more powerful than any shot by an ordinary hunting rifle.

The left applies the scary term “assault weapons” to play on emotional responses, but it isn’t working anymore. More Americans oppose banning so-called “assault rifles” (53 percent) than favor it (43 percent), according to a Gallup poll from October 2011. The poll also showed the lowest level of support for new gun laws in history.