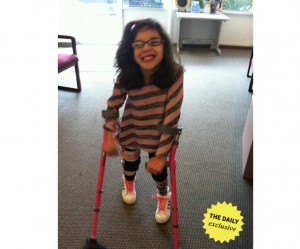 As the Frank family first entered the security line they explained to agents their daughter Dina cannot go through the X-ray machine, as suffers from cerebral palsy and must use crutches to walk.  If agents wanted to search her physically they should introduce themselves to her and be gentle, as she is developmentally disabled and frightened by strangers.

Instead, TSA handled her aggressively, terrifying the little girl.  Dina’s father pulled out his phone to videotape the incident, at which point “the woman started screaming at me and cursing me and threatening me.”

After determining the seven-year-old disabled girl on crutches was not a terrorist, TSA agents allowed the Frank family to proceed.

But as they boarded their flight to Florida, TSA agents pulled them off the plane and forced the entire family to go through the security process again.

The Frank family missed their flight.