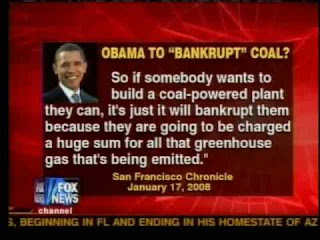 Coal producer Alpha Natural Resources announced today that it is “eliminating 1,200 jobs companywide, including 400 with the immediate closing of eight mines in Virginia, West Virginia and Pennsylvania,” The Associated Press reports. Company officials cite “a regulatory environment that’s aggressively aimed at constraining the use of coal” for the closures, adding to the growing list of American energy producers who say the Obama administration’s excessive red tape has contributed to thousands of recent layoffs.  Here’s more:
The Obama administration’s war on coal is costing jobs and forcing American energy producers to shift “their attention to markets overseas, where coal-fired power plants are being built faster than they are being abandoned in the United States,” says The New York Times.  House Republicans are taking action on the Stop the War on Coal Act this week to protect American jobs by blocking some of the Obama administration’s most damaging new regulations and holding the administration accountable for the economic impact of several others.  The House has already passed numerous bills aimed at eliminating the excessive regulations that are blocking American energy production and costing jobs. It is up to Senate Democrats to act on these and the more than 30 other bipartisan, House-passed jobs bills they are stalling.

From the office of the Speaker of the House