White House representative: The Jews did 9/11 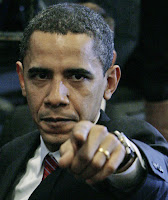 "President Obama’s representatives to an ongoing international human rights meeting in Poland include on man who suspects Israel of playing a role in the September 11 terrorist attacks," The Washington Examiner's Joel Gehrke reports.

"Salam Al-Marayati, head of the Muslim Public Affairs Council, called for the United States to investigate Israel for a possible hand in bringing down the World Trade Center towers," reports Gerhke.

”If we’re going to look at suspects, we should look to the groups that benefit the most from these kinds of incidents, and I think we should put the state of Israel on the suspect list because I think this diverts attention from what’s happening in the Palestinian territories so that they can go on with their aggression and occupation and apartheid policies,” The New York Times quotes Marayati as saying in October 2001.

Obama's hand-picked human rights representative also praised the 1983 Beirut bombing of the U.S. Marine barracks that killed 241 Marines, saying it was "the kind of attack that Americans might have lauded had it been directed against Washington’s enemies."