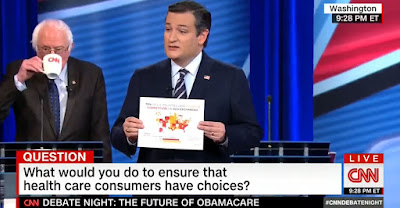 In a prime-time debate on CNN, Sens. Bernie Sanders, I-Vt., and Ted Cruz, R-Texas, discussed “The Future of Obamacare” in America. Cruz, a leading critic of the law, used the moment to outline the law’s failures.

2) “Indeed, I don’t know if the cameras can see this, but in 70 percent of the counties in America, on Obamacare exchanges, you have a choice of one or two health insurance plans, that’s it … It’s interesting. You look at this map, this also very much looks like the electoral map that elected Donald Trump. It’s really quite striking that the communities that have been hammered by this disaster of a law said enough already.”

During one of the more powerful moments in the debate, Cruz held up a Heritage Foundation chart showing viewers how many counties in the U.S. have access to only one or two insurers under Obamacare. Additionally, only 11 percent of counties have access to four or more insurance providers.

3) “Whenever you put government in charge of health care, what it means is they ration. They decide you get care and you don’t. I don’t think the government has any business telling you you’re not entitled to receive health care.”

The U.S. should not envy other health care systems, especially Canada and the United Kingdom, Cruz said. He referred to a governor from Canada who came to the U.S. specifically to have heart surgery.

4) “That’s why I think the answer is not more of Obamacare, more government control, more of what got us in this mess. Rather, the answer is empower you. Give you choices. Lower prices. Lower premiums. Lower deductibles. Empower you and put you back in charge of your health care.”

Obamacare is burdening Americans. The average deductible for a family on a bronze plan is $12,393, according to a HealthPocket analysis. According to an eHealth report, the average nationwide premium increase for individuals is 99 percent and 140 percent for families from 2013-2017.