White House jokes about killings of Christians in Egypt 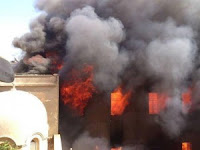 "The White House’s deputy press secretary today downplayed Muslim attacks on Christians in Egypt, joking about the savagery  that has left at least six Christians dead.

"Press secretary Josh Earnest was asked by Fox News’ correspondent, Ed Henry, if President Barack Obama has a “red line” beyond which he would act against Muslim attacks on Egyptian Christians.

“Well, I didn’t bring my red pen out with me today,” Earnest joked.