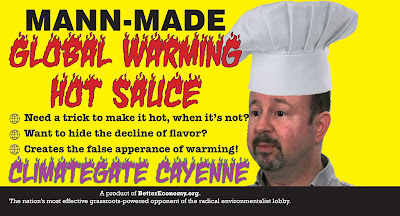 “Man-made global warming may be a money-making fraud, but with Mann-Made Global Warming Hot Sauce the flavor is real.”

“Whether you’re in the kitchen or promoting the environmentalist agenda we’ve all been in a situation where you told people something would be hot, but it’s not,” says Americans for a Better Economy President Donny Ferguson.  It doesn’t matter if you’re cooking dinner or the books, because Mann-Made Global Warming Hot Sauce lets you become a climate researcher in your own kitchen. Hide the decline of flavor and instantly create the appearance of warming where none exists.”
“It’s available at BetterEconomy.org for just $9.95.  Now you can annoy a liberal while livening up a meal!,” said Ferguson.

“At least we’re honest enough to admit we’re making money by manipulating something to make it seem hotter,” said Ferguson. “Man-made global warming may be a money-making fraud, but with Mann-Made Global Warming Hot Sauce the flavor is real.  Just don’t use tax dollars.”

“Environmentalists are being paid millions of tax dollars by left-wing politicians to falsify research and fake data,” said Ferguson.  “If your research backs up the fact there is no man-made global warming, politicians cut off the research funds and you lose your job.   Politicians paid for this research and dictate what the results must be, so they can use it to agitate for massive tax hikes and schemes to increase their own power.”

The product references several scandals in which scientists paid with tax dollars to prove man-made global warming exists were caught manipulating data to create the appearance of rising temperatures.  Among them is the University of Virginia and Penn State University researcher Michael Mann, who exploited what researchers called “a trick” to “hide the decline” of global temperatures.

Unlike most scientists, Mann refuses to disclose how he conducts his research and has sued citizens who asked him to explain why he was manipulating data.